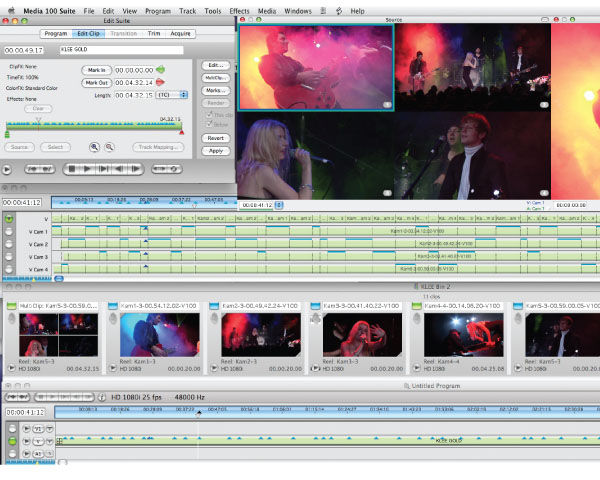 Media 100 has been a player in video editing for a long time, but is relatively new to the software-only world.

The Great Try Before you Buy 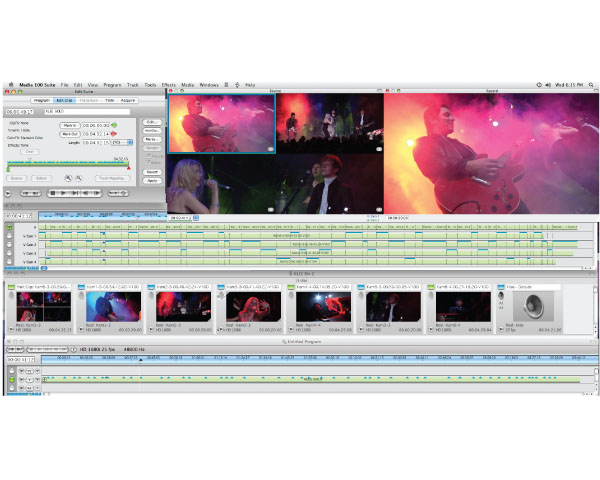 A full-feature two-week trial download of Media 100 Suite is available that can be purchased and unlocked, so you can get right to editing and trying out the software. Media 100 Suite supports Matrox MXO2, AJA video I/O cards, Media 100 HDx hardware, FireWire I/O, and Panasonic P2 acquisition. Media 100 Suite also can exchange projects with Final Cut Studio and Adobe After Effects. 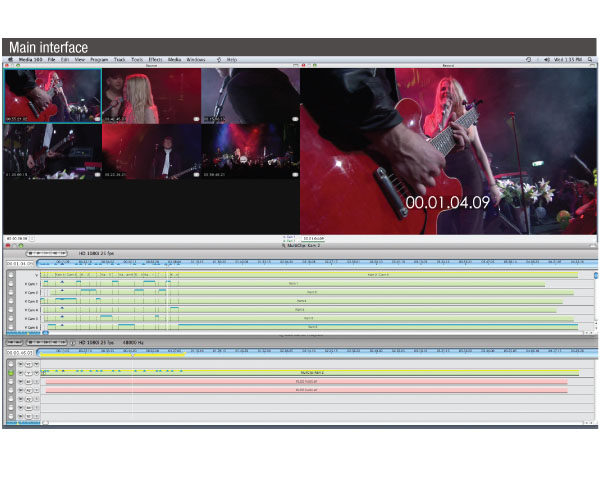 Media 100 Suite is compatible with existing Media 100 products, so for those already familiar with the Media 100 workflow, there is a relatively short learning curve.

One of the more powerful features is “MultiClip Editing”, the ability to sync up to nine different clips to simulate realtime switching between sources. I loaded in some footage I shot at my daughter’s first grade performance. I had two different angles, and within minutes I had both synced up and color corrected the two different cameras. It was then fun to switch between the two sources in real time, and with a little tweaking I had a finished show. It made me wish I had set up more cameras (or gotten additional footage from other parents) because it was so easy.

We also discovered that when importing a group of pictures you can bring them in as one clip, making a quick and dirty way of making a stop-motion effect. With a little Photoshop work, you can make a simple animation. The Media 100 Suite has plenty of audio tracks to suit all but the most intense audio needs, and with the addition of Boris RED is a very powerful video editor.

The Media 100 Suite is the next step in an ever-changing market towards software-only editors. Building on the experience of years of broadcast-quality hardware, the Media 100 Suite has positioned itself to challenge the big boys. As with any 1.0 version, there are expected to be a few quirks-at times it seemed a bit sluggish switching back from other programs. As more companies adjust their products to be compatible with this new software, you can expects more updates along the way.

While working on this review, Contour Design ShuttlePRO V.2 settings for the Media 100 Suite became available, which we found to be a huge time saver.

If you are in the market for a new nonlinear editor you should definitely give the Media 100 Suite a test drive. If you are considering upgrading to the latest version of Final Cut Studio or Adobe After Effects, then by all means, download the free trial and open up some of your existing projects to see how Media 100 Suite works. Everyone has a different style of editing and some programs are more comfortable to your style. I was very impressed with the MultiClip Editing feature and will try using it on the next multi-camera project I have. I would miss background rendering (it is one of the few times I get to just surf the web for fun while a render is going on) but if enough people complain I would anticipate that would be one of the first things that gets upgraded.

As we put the Media 100 through its paces, the PDF user guide was a great help. All the tools were there – we just had to remember the Media 100 language (was it Cut, Divide, Split or Slice?), and the Guide helped us through with flying colors. If you are familiar with timeline editing, then the learning curve is not too steep.

We would like to have tried it with a number of different hardware configurations, both to confirm computability and to see if there are any performance differences.

The render times were not long, and, as with any software editing program, the more memory you have, the better. This could be a good excuse to get that memory – our test system had just the minimum 2GB, and we would expect zippier renders with the suggested 6GB.

George L. Robinette has been a video editor for more than 15 years and works at a network television affiliate.