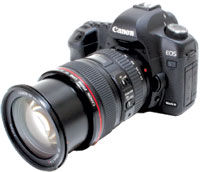 We have to admit that when we first heard of a Digital SLR camera also shooting video, our first thought was “novelty,” but now that we’ve had the chance to play with the new Canon 5D Mark II, our thoughts have changed quite a bit. With Live view, full HD 1080p video and an outstanding full-frame 35mm sensor, this camera could be the start of a new and permanent trend. Let’s take a closer look at this digital still camera from a videographer’s perspective.

Now let’s get on to the fun part. Even though the 5D Mark II is primarily a still camera, we aren’t going to spend too much time writing about its still shot capabilities, but instead focus on its use as a video camera.

The first thing we noticed after shooting off a fair number of stills was how sharp and clear the images came out. The color processing is outstanding and will make even the most inexperienced photographers feel good about their shots. The second thing we noticed was that you need a fast computer to edit such large images.

Overall, the still capabilities and quality of the 5D Mark II put Canon at the top of the market, and, we believe, produce some of the finest imaging available for small-format cameras.

This is the exciting part of the review. When you switch the camera to Live mode, the shutter opens, exposing the sensor to the lens and starting a video preview to the LCD. From here you can see a live preview of what the Digic Sensor sees. Pressing the Set button, located in the middle of the selection wheel on the back of the camera, will start recording video in either 1920×1080 (full HD) or 640×480. The major advantage here is that, depending on which lens you are using, you can get really high-quality optics with that short DOF (depth-of-field) film look. Unfortunately, the video setting will not activate the autofocus feature on the attached lenses, making moving targets quite a challenge.

Ergonomically, shooting with a DSLR takes some getting used to: you look through the camera by holding it directly in front of your face, rather than by looking through a viewfinder or using a swing-out LCD panel. On low-set tripods or in the bright sunlight, it was very difficult to see much of anything at all, much less accurately focus. An LCD shade is definitely a necessity for video work.

Our first test was outdoors, and one major drawback we saw right away is that the camera instantly switches the video to auto shutter, exposure and ISO (gain, in video language), taking all manual settings away. Unfortunately, there is no way around this one. Strangely, you can manually adjust all of your settings in live preview mode, giving you a preview of what your still shot will look like, but, as soon as you start recording, it switches right back to full auto mode. It can be difficult to compensate for letting the auto mode control your video, especially for something like bright sunny days in the snow, where the iris cranks down (eliminating your shallow DOF), and the shutter speed goes into thousands of fractions of a second, giving your video a choppy staccato look. This may be a huge negative for those hoping to use the 5D Mark II as a professional video option. The camera works great on a tripod, capturing in an environment where the lighting doesn’t change too drastically.

The next test was indoors with fixed lighting, using a talking subject. We were also able to use an external microphone, thanks to the mic input found on the 5D Mark II. That’s right – it even has an external mic input. The capture length is limited to either the size of the compact Flash card or 12 minutes. We used a 200mm lens and found the narrow depth of field to be a bit narrow, as our subject frequently moved out of focus. More light would have solved this problem a bit by allowing us to reduce the aperture size. There is no manual audio control found on the 5D or audio metering, for that matter, so you have to trust the built-in auto gain control.

The video shot by the 5D Mark II is rich in color and saturation and does have a filmic quality and look to it, giving it an edge even over competing mid-level prosumer HD camcorders. There is only one format option, which is 30fps, and the compression format is QuickTime H.264. Having only one format does make it easy for editing, as there should be no special plug-ins or codecs needed to allow your editing software to recognize and use the footage.

We edited together both sets of footage and were really impressed at the clarity and the quality. For not being a video camera, it really does produce very high-quality video footage. We also want to add that the 5D operates quite well in low light, due to a really wide ISO range of 50-25,000. That gives you the option of shooting at night where there is limited light available (with film noise, of course).

Being able to shoot HD video with an SLR camera really does open up a whole new set of possibilities. The increased DOF and large image sensor will be attractive to any video enthusiast. We will say, though, that the lack of manual video control is a big drawback. It really does limit the operator. Simply being able to control video settings and audio level would make this camera usable for documentaries, interviews, commercials and short films.

Is the Canon 5D Mark II a viable replacement for a dedicated video camera? Well, not really. However, the video itself is impressive and, as a category, DSLRs are poised to make a huge impact in the professional video space, once Canon gets a few of the early kinks worked out. We’re eagerly anticipating what the next generation of DSLRs brings to the table.

Whether you’re an independent filmmaker looking to try something a little out of the box, a stock photographer who wants to add video footage to your collection or just a hobbyist who wants to get great-looking stills and video of your travels, the Canon 5D Mark II will impress.

Auto Focus: Only in still mode

An amazing new choice for beginners who are looking to move into the more professional landscape.

Brent Holland is a still photographer and video producer who owns his own wedding and event company.