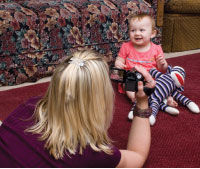 You have a new baby? Congratulations! And you have a video camera? Oh, dear.

Every year Americans record millions of hours of video footage of their children. It’s a national pastime, a precious and valuable record of an important time. It’s also, at the same time, one of the easiest and one of the most difficult video projects to undertake. This month we’re going to look at some techniques that will help you produce, edit and distribute videos of your kids that will have friends and relatives begging for more instead of running for the door.

You can show a 45-minute un-edited videotape of Junior playing in the sandbox to your parents, and they will happily nominate you for an Oscar. But try that with your office mates or softball buddies, and they’ll be yawning by the third minute.

Your kids are never going to be this young again. Tape is cheap, so shoot, shoot, shoot. A few tips:

Videotape is cheap. Shoot a lot, and organize it meticulously. Sort by date, and include a description of the tape’s contents. On the side of the tape, you can write something brief like “July 31, 2009: Zoey and Liam at the park with Chris and Charlie.” If you have the space to write more about the day, that’s excellent. But, at a bare minimum, the tape needs to have the date, the event and a list of the people on it.

Never erase a tape, no matter how trivial you think it is. Reorder when you get low, not when you’re out. Keep a single “emergency tape” in your camera bag as the “tape of last resort.” Keep your originals archived in a safe place (preferably a fire safe). If you are shooting on memory cards or hard-drive cameras, dump that footage regularly, and make sure to practice proper media management to find it later, both through good labeling practice and backup procedures.

Now we come to the key for making your videos a success. You have done the groundwork: you have great footage – well composed, beautifully lit and endearing. Now to package it for your audiences. When you make videos for the general public – your friends at the office, friends from school, casual acquaintances – remember that these people are interested in your baby videos because they’re interested in you, and their attention span is probably somewhere between a minute and a half and three minutes. For videos that you’re sharing with family and close friends, you can go a lot longer – ten to thirty minutes, depending on how much good footage you have. So edit together your long video first – the one you’re going to show to Mom and Dad. Save it, and then re-edit a second version from that – it will be significantly shorter, just keeping the highlights.

Be kind to your viewers. People know what they’re getting, and they’re here to see the baby, not to be blown away by cinemagraphic genius, so you can actually be a little sloppier than you might normally be. You can edit fast and be a bit imprecise in your cuts, but stick to the good footage. Beware of shots that linger too long without a payoff and keep on track.

Internet distribution methods like YouTube have really revolutionized video usage. Now it’s possible to upload videos on a very regular basis and allow interested people to subscribe and be alerted when a new video is posted. This means you can post short videos and long videos and let people choose what to watch. Remember, as with all things on the internet, protect your kids’ privacy by creating a private channel when you use a site like YouTube or even social networking sites like Facebook and MySpace. Then, if you have a large family-and-friends subscriber base for your baby videos, make them tight and clean and watchable, and your audience will always be delighted when they get an announcement that you’ve uploaded another better baby video for their viewing pleasure.

How Your Camera’s Limitations Change the Way You Shoot (and How...