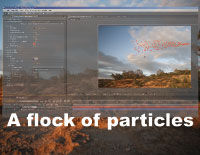 Rain, fire, even a flock of birds can be easily controlled using particle software features without animating each element.

Particles can do more than just add sparkle to an effect. You can use them to blow things up; make fire, smoke, rain and snow; and generally make a controlled mess of things. But you can also use particles as controllers for individual elements in crowd scenes. In this tutorial, we’ll show you how to use After Effects to corral a crowd, or rather a flock, of birds that fly across your scene without the hassle of animating each one.

There are a few concepts you’ll need to become familiar with if you have not used particles software or After Effects particles before. With particles, you control the forces that govern their generation and motion, rather than the precise positions of the particles themselves. This will be a big change if you are used to controlling every last detail of your scene with keyframes. But the power of particles is precisely that you don’t have to control each one.

The properties you can control generally include generator type, particle size, velocity, weight or mass and other real-world forces such as wind and gravity. These properties may be termed differently by various programs and plug-ins, but they all attempt to mimic how real-world particles behave. If this vocabulary sounds familiar, don’t worry, this won’t turn into your college physics class.

Import a still image you’d like to use for your background. We’ll use a photograph taken from a ridge that has plenty of open sky for our flock of birds, and we’ll drag it into our timeline panel.

Create a new solid layer and name it Bird Particles. It should now be the top layer in your timeline panel. Click on this layer and go to Effect>Simulation>Particle Playground.

The effects panel should now be open, displaying the ten main Particle Playground parameters. The first four are really separate particle systems in themselves, and they give you an incredible amount of control over how you create and generate your particles. For now, we’re going to focus on just the Cannon, which is on by default. If you want to later experiment with the other particle types, you will need to manually turn the Cannon off by setting the Particles Per Second from its default value of 60 to zero.

To see what you’ve got so far, scrub your current time indicator to about three

Our birds will be flying from right to left, so we’ll need to do a few things to our particle generator.

First, let’s rotate it to minus 90 degrees and move it to the upper left edge. Next, let’s reduce the force of gravity to just a little more than zero, so our birds gently follow the contour of the sloping ridgeline. A value of seven should do it.

If our flock were really flying on screen, it probably would not be bunched up as if the birds were being shot from a cannon. Fortunately, this is easy to fix by changing the Barrel Radius of the Cannon from zero to a value of 75. We can adjust this later when we have turned our particles into birds and get a sense of how much space we want between them, but for now this value will be close.

We can reduce the Direction Random Spread from 20 to approximately 12 to narrow the path and bring a little more organization to our flock.

Do a RAM preview, and see how the flock of red particles is looking. The Velocity of 130 is about right, as is the default value of 20 for the Velocity Random Spread. The Particle Radius will not impact our final composite, so we can safely leave it at two.

For our bird, we used Poser to animate a five-second flapping cycle that is repeated two times for a total 10-second animation. Except for the flapping, the bird remains stationary within the Poser environment. We rendered our solo bird, named Flying Hawk, as an .AVI with a transparency (alpha) channel, imported it into After Effects and dropped it into the top layer of our timeline.

Click on the Bird Particles layer, and, in the effects panel, twirl down the Layer Map property. To the right of Use Layer, select your Flying Hawk layer and, presto, instant flock!

As you can see, we have a lot of birds fighting for some wing room, so let’s reduce the Particles Per Second to four. That’s better.

Before we put our final touches to this scene, deselect the visibility eyeball of the Flying Hawk.avi layer, as now we want to see only the particle-birds.

Do another RAM preview, and you have a nice flock of birds…doing exactly the same thing. Not particularly realistic. So let’s adjust two more properties. Go to Layer Map>Use Layer>Time Offset Type, and select Relative Random. Just under this, change the Random Time Max to .9 or whatever value looks best for your scene. You may need to move your Cannon off screen to the right, so that this new setting does not start popping on birds within your viewable frame. This setting will also shorten your usable scene length. The scene now begins emitting your particle-birds at slightly different points in their animations, giving the impression of each being a unique flyer.

Particles of a Feather

Now that you have the basics, you might want to experiment with the Repel Force. Keep the value below one, and watch how the particle-birds now interact with each other. The effect is not what you might see in most flocks of real birds, but it is a powerful parameter you can control for other types of particle effects. The remaining three properties of Wall, Persistent and Ephemeral Property Mappers control advanced features that integrate use of masks and image maps that give you practically an unlimited amount of control – for another tutorial, or two.