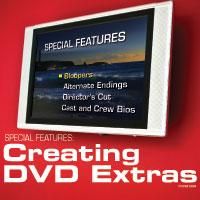 People love movies, and many people love them enough to want to watch movies about the movies they love.

Special features are any additional audio, visual or interactive media that exist beyond the original version of a film on a DVD. These features may be items such as extended versions, director’s cuts of the film, audio commentaries, behind-the-scenes featurettes, documentaries, production stills, cast and crew bios, alternate endings, animatics, interactive games… the list goes on and on. So, if you can dream it up as an added feature, someone somewhere is going to appreciate it. Let’s take a closer look at a few common special features you can add to your own DVDs.

Audio commentary is an alternate audio track that plays over the film and discusses other aspects of the movie. The typical commentary is the director discussing specific scenes, motivations or challenges. Often you may find commentaries from the actors, special effects artists, editors or even a whole group of people. Audio commentaries have become standard on most DVD releases, partly because they are incredibly inexpensive to do and easy to add.

You can include an audio commentary on your own discs by recording yourself talking about the film as you watch it and adding it as an alternative audio track to the disc. This is great when bit-budgeting your DVD for space, as it does not need to duplicate any media. In short, you’re adding an additional track of audio rather than introducing a second copy of the whole movie.

Many studio releases feature a director’s cut of the film as a special feature. Often in the studio system, the director doesn’t maintain 100% of the decision-making in the theatrically-released version of the film. This happens for a variety of political and profit-based reasons that we won’t get into here. Sometimes the director’s wishes for the film differ greatly from what the studio releases, and other times it may just be a scene or two – maybe even the ending! DVD is a great place to exhibit this alternate version of the film. Extended versions function in the same way. Often they include footage that editors cut for time purposes or that they deemed unnecessary to the film.

If you’re authoring your own DVD, chances are that a director’s cut may not be necessary, as no one is probably telling you what you can and can’t do. There’s always a chance that you might have various cuts of the film that you’d like to share, though, or an extended version. Putting an alternate cut of the entire film on DVD requires another complete copy of your film to play back smoothly. So, if your movie is 90 minutes and the director’s cut is 110 minutes, you’ll need 200 minutes of discspace. When you are bit-budgeting, something like this is critical, because it essentially doubles the amount of space you need.

Often, a decision like this will force you to make a compromise between compression quality, going from a 4.7GB to an 8.5GB disc or adding an additional disc to your DVD set. It is good to be mindful of these things when your disc is going to duplication or replication, as upgrading disc capacity or the number of discs in your release can be very costly.

Deleted scenes are portions of the film that were shot and edited but removed from the final version of the film for any of a variety of reasons. You’ll often find a ton of these in comedy films: jokes that didn’t work, were just too risqu or would push a PG-13 movie to an R.

One of the easiest and most fun additions to your DVD masterpiece might be the deleted scenes feature. You can treat each individual scene as its own piece or cut them together as one seamless group of outtakes. Deleted scenes add to the amount of bittage on the disc, so it’s good to keep an eye on just how many you may add. However, the added data is nowhere near the amount required for adding multiple versions of the film, so it is less of a concern.

Alternate endings are a great and exciting draw to our favorite films. This is especially true when a film has a lot of mystery and open-ended possibilities. Some thrillers may have alternate endings with different characters ending up as the killer, or a drama may end with a key player dying, changing the whole feel of the film. For the most part, alternate endings provide a much less dramatic difference from the theatrical ending of the film, but they are an intriguing addition to the DVD nonetheless.

Adding alternate endings to your own DVDs is very much like adding deleted scenes. You’re essentially adding another movie track that a viewer can choose to play. You can take it a step further by having the entire film watchable with the alternate ending rather than the theatrical ending. Doing it this way requires either duplicating the files or creating a playlist that tells the main film to stop playing at some point and jump to the video of the alternate ending.

Behind-the-scenes featurettes are short videos that focus on events that happen behind the camera lens. They may show how the crew accomplished specific shots or effects or how various aspects of the film came to be. They may feature the actors discussing the film out of character. The Lord of the Rings has countless hours of amazing BTS footage on just about every aspect, from hand-making each costume to the final digital effects shots. Pirates of the Caribbean illustrates how the film merged CG with practical acting to bring life to the tentacles on Davy Jones’ face. Superman Returns shows how the editor digitally manipulated existing footage of Marlon Brando long after his death to incorporate him into the film. Things like this provide an amazing and in-depth look at the filmmaking process.

The Easter egg is a hidden special-feature link on a DVD menu. These invisible buttons link to outtakes, secret endings or many of the features we’ve discussed thus far. They are fun to find and exist on many of the DVDs you may own. In the first Pirates of the Caribbean DVD, there is an Easter egg linking to an interview with Keith Richards talking about being the motivation for Johnny Depp’s character, Captain Jack.
On the Star Wars: Episode I DVD, you can access bloopers of the film by entering a specific number sequence in the right menu.

You can make Easter eggs as easy as an invisible button on a menu or as complex as a series of invisible buttons that force the user to enter the right key combination to get there. When authoring, you can even program specific numbers on the remote to trigger playback of hidden clips. The key in making your own Easter eggs is making someone want to take the time to find them. There are websites dedicated to finding known and unknown Easter eggs in movies.

Many DVD releases are marketed using the special features as a sales hook. Some films release a DVD with few or no extras and later release special editions with loads of additional material. The presence of special features gives an added value to your DVD product and offers the viewer a more involved viewing experience. Many types of features are incredibly easy to add to your own films from existing footage you acquired as part of making the movie or from materials gathered during the filmmaking process. For other types of features, like interactive games or bonuses that feature materials not acquired during filmmaking, you must meticulously plan in advance.

With DVD extras, if you can make it, someone will probably watch it.