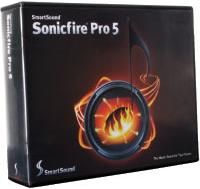 The Sound and The Fury

Everyone knows that the musical score is responsible for a lot of the emotional impact of your video. The score underlies the emotional cues that you want the picture to express, and the music track becomes one of the most powerful elements in your video production arsenal.

In feature films and television shows, the video is handed over to a small army of composers and audio experts to create rich and dynamic soundtracks. For independent producers, this kind of audio treatment is way out of budget. For most, the best solution was to buy canned music CDs and hope the pre-recorded tracks remotely resembled the music you imagined in your mind. The quality of the music generally ran the gamut between very good and laughably awful, but you were always stuck with the music that was on the CD, and your editing options were pretty much limited to volume adjustment and length.

The basic idea behind Sonicfire Pro is to have all the conveniences of a music library, but to be able to edit many more of the musical attributes in an intuitive way. Say you’ve got a great piece of music and the only thing wrong with it is the annoying high-pitched flute. With Sonicfire Pro, you can tell the software to get rid of the flute and keep everything else. Conversely, maybe you just want the haunting flute solo by itself and leave out the drums and guitar. You can do that too.

One of the most important features in a music library is a fast and intuitive searching engine. It’s hard to imagine how much time used to be wasted in going through stacks of CDs, hoping that you’d find the right track based on cryptic descriptions on the back cover. Sonicfire Pro includes Express Track, a utility that catalogs all your SmartSound music files and allows instant access not just to the files on your local hard drive; if you’re connected to the Internet, it searches SmartSound’s entire music library as well. You can sort and search tracks by genre, intensity and tempo, as well as use the new sensory searching, which is a new feature we’ll talk about below.

The library itself is fairly extensive, with 79 multi-layer music track discs available currently, with three to four new discs being released each month. The depth of offerings is very good and covers all the more common genres. The tracks themselves are of very good quality, and each disc is $100 to purchase (with quantity discounts available). There are single-track sales, so, if you like a certain track, you don’t need to buy the whole CD that it’s on. This price gives you the basic rights to use the music in your productions (outside of major theatrical releases and nationwide broadcast TV), and all the fees and licensing are taken care of by SmartSound.

One of the most common things a video producer does when editing music is to lengthen or shorten the track to fit a particular scene. It used to be that cutting on the beat and adding a short audio dissolve was the best you could do; you’d just hope the audience didn’t hear where the cut took place. Sonicfire Pro Scoring Edition takes actual music editing to a new level. Now, when you adjust the length of a music piece, the software recreates the entire music track not just to fit timewise; it also adjusts the music itself to keep the intros, endings and crescendos in place, regardless of the length that you stretch or shrink it to.

One of the more amazing features of Sonicfire Pro is Mood Mapping. Not only can you change the length of the music intelligently, you can also change the actual instruments that make up the music track. For example, you may want the full version with all the instruments for your open, and then, as there’s a bit of dialog, lighten up the mix by removing the heavy bass, such as drums, so it’s easier to hear the voices. Usually each track comes with multiple preset “moods” to choose from, but you can also manually decide what instruments you want to keep and which you want to hear on the timeline interface.

Sonicfire Pro brings some very useful new features to the table, including enhanced musical timing controls. Each multi-layer music track is broken up into a series of blocks of music. Using the timing controls, you can select where you want to have these blocks start to accentuate scene changes or to emphasize certain parts of your scene. Keep in mind as you’re doing this that you’re literally rewriting the music on the fly, to perfectly customize the song to your specific scene.

You are able now to change the tempo and pitch of tracks, so, if you have a song that’s just a little slow or just a little fast, you can adjust it to your needs. However, there are limits; if you stretch the tempo a little too far, you’re going to start mangling the tracks.

One of the new features I’ve found most useful is the ability to insert a “stinger” at will. A stinger is a short clip of, say, cymbals or fast drum beats that act to emphasize a certain point. They’re great for when you want to cue the audience that the previous scene is finished. It’s as simple as dragging your timeline indicator to where you want it to hit and then inserting one of many instruments and styles of stingers. This is now so easy to do that it’s easy to abuse, so be careful and judicious with your newfound power.

New to Sonicfire Pro are the advanced searching features. Again, reading about music and finding a good selection from a text description is something like finding a needle in a haystack, so SmartSound’s come up with what they call sensory searching, to help you find the right track more intuitively. Once you find a track that’s in the ballpark by listening to its preview clip, you can select parameters to your search such as: more like this, faster, slower, more intense, etc. This helps you navigate quickly to what your brain knows it wants but can’t necessarily articulate in words.

Another cool feature that I found myself using more and more is the tap tempo feature. This simple but elegant tool allows you to use your mouse to tap in the rhythm of what you’re looking for, and it will narrow down your selections based on the tempo you keyed in. So, if the music in your head is going sda-dada-da-da, just tap that in (a minimum of five taps is needed), and it will return appropriate suggestions for you.

Every once and a while, you come across a piece of software that reminds you just how useful computers can be to video production. Sonicfire Pro 5 is musical-scoring software that blends powerful features with a simple and intuitive interface. It allows you to create astounding customized musical scores for your videos that you may never have known you had in you. Once you’ve tried Sonicfire Pro, you will never go back to your stack of buyout CDs again.