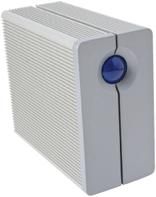 LaCie is well-known for innovative storage solutions, among other products. We were excited to get our hands on one of its newest products, the 2big Dual 2TB RAID.

It’s a unique disk array that includes the most novel method we’ve seen recently for changing modes – but it’s a way that ultimately makes a lot of sense to us.

First things first: it’s a 2-drive RAID, configured with two Hitachi 1TB drives. Interface-wise, this system includes USB 2.0 and eSATA ports, but for roughly the same money, a version that swaps out eSATA for FireWire 400 and 800 is available as the 2big Triple.

Like the typical LaCie product, the 2big is a visually attractive device. The case is pretty much all-aluminum, with the exception of the big blue button up front. That button launches any application of your choosing when you connect the drive to the computer via USB or FireWire, but, most logically, you would use it to initiate a backup. It also doubles as a status indicator.

When the system is healthy and happy, it shines a placid blue, but when something is wrong (e.g., RAID rebuild in progress, drive failure, etc.), it turns an angry red. If you come face to face with that red light, you turn the drive around to observe the individual drive status indicators that show which of the drives is having issues. The included CD-ROM documentation decodes the light colors and flashes succinctly.

Also on the back of the 2big are power connections, the power switch, the USB 2.0 and eSATA ports, the drives themselves (as held in sleds), a RAID mode selector and a Confirm button. More on those later.

The fact that the system allows you to remove the drives individually is unique for a two-drive system (while it’s common for an array with more drive bays). It’s as simple as unlocking the drive with a coin and pulling the sled out.

We’re not sure how many of our readers are “old-timers,” per se, in the IT field. The reason we make that observation is that you select RAID mode with a rotary switch. The last time we saw one was in the bad old days of SCSI devices, where you had to select device IDs by hand. (At least you don’t have to deal with device termination these days…) The RAID modes are Big, or both drives concatenated together; JBOD, or “just a bunch of disks,” where each disk shows up individually to the computer; Fast, or RAID 0, where the disks are striped together; and three Safe modes. Safe100 makes the entire disk show up as a RAID 1 (mirror) set. Safe33 makes a third of the array a mirror set and the rest of the array a concatenated, er, “big” drive, yielding 310.5GB of “safe” and 1242GB of “big,” for a total of 1552.5GB of available space. Safe50 gives 465.75GB of “safe” and 931.5GB of “big,” for a total of 1397.25GB available. Otherwise, each drive has 931.5GB of formatted capacity.

To switch modes is easy, but do it judiciously. If you switch modes, all of the data you recorded in the mode you are switching out of will be lost. The drive ships in Fast mode. To actually perform the switch, unmount the drive from the operating system (do a “safely remove hardware” operation on a Windows machine or drag the drives to the trash can on a Mac), turn the rotary switch to the desired mode with a small flat-blade screwdriver and press the Confirm button. Wait a couple of seconds, and your reward will be a couple of light blinks. The newly-reconfigured array is now ready to format.

Using eSATA gives vastly better performance. In Fast mode (RAID 0), the transfer rate is between 82.1-91.3MB/sec and averaged 87.6MB/sec. Scores for Big (concatenated) and JBOD were naturally similar, running at 82.9MB/sec at the outside of the disk and 41.5MB/sec at the inside of the disk and averaging 69.5MB/sec. Using the drive in a mirrored mode incurred a slight performance hit, giving a max of 76.1MB/sec, a minimum of 39.0MB/sec and average of 63.3MB/sec. The CPU utilization of the system when used with the eSATA interface is quite low – 0.5 to 1.5%.

For your money, you get a pretty fair value for a very well-designed and attractive piece of functional hardware. We would happily have one of these drives on our desk, if only for the fact we could tell people that they are looking at a box that holds 2TB. Then again, considering how cheap storage has gotten over the years, it might not even faze that many people anymore when they hear that.

The only way this drive could possibly be better is if FireWire ports were also available, but, considering LaCie’s history, we wouldn’t be that surprised to see the next 2big array being a quad-interface unit.

A satisfying choice for a fast and versatile external disk array.