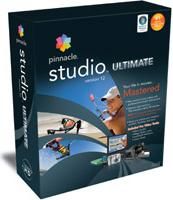 Marrying Ease and Fun Together

Version 12 of Pinnacle’s popular Studio editing software offers 3 levels: Pinnacle Studio ($49), Studio Plus ($99) and Studio Ultimate ($129). Registered Studio users can upgrade to Plus for only $69 and Ultimate for $99. We tested the Ultimate version.

Pinnacle Ultimate 12 has lots of features that give you a big-time editor’s look and feel, using templates and presets that add filters and effects without your having to do the math – good for beginners.

The 300-page user guide was useful to a point, but it sometimes revealed only definitions, not how-tos. We did find a how-to guide for version 11 on Pinnacle’s website (www.pinnaclesys.com/PublicSite/us/PinnacleLife) and assumed that basic editing features in Version 12 will be the same. It has step-by-step tips complete with illustrations and easy-to-follow instruction. Pinnacle’s site also has how-to tips.

Your sound automatically drops onto one of four specific audio tracks when you add the audio with your video clip, music or sound effects to your timeline, but you can swap them out. We mixed three layers of natural sound with two music beds and had no need for more tracks. However, Studio still has only two tracks for video – the main track and the overlay track – which you would use for titles or the video for layering picture-in-picture scenes, for example. But you can now layer more video through the Montage features – more on that in a moment.

Scorefitter is a library of customizable MIDI tracks that can fit your background music to any length you require, which is nice when you need to shorten or add length to that last scene.

Ultimate again includes the green cloth for chromakeying as in the past.

Studio Version 12 now includes key frame placement for audio tweaking. In the audio effects window, you’ll find a true digital audio mixer. The master volume control lets you pull the entire program’s volume up or down, without messing with your finely-tweaked mix. Or you can play with individual tracks for added tweaking… live. Just toggle the volume control of a track and the program remembers what you did and play back the changes.

Montage, new to Studio 12 Ultimate, uses 80 pre-made templates and multi-layered effects. Many may be a bit too gimmicky, but they are fun to play, and with new plugins, Pinnacle has raised the bar on the quality of the effects.

Other new features: a crop tool that lets you crop the black bars from the edges of photos or video, an Asset Reference tool that allows you to easily find a clip in the timeline or album, 27 new titles and 30 new DVD menus.

New to Version 12 are some pretty powerful aps that would singularly cost you much more than the Studio Ultimate, so it’s a pretty good deal. Boris Graffiti costs around $300 as a standalone 2D and 3D titling effects software. This powerful program includes hundreds of stylized presets, titles, fancy lower-thirds and text filters.

ProDAD VitaScene’s cool light filters and artistic transitions, from light rays to optical blurs, would be a great tool for wedding or worship videos.

Magic Bullet Looks is a filtering effects software that can give you a stylized look to your video, such as a sepia or old-film look.

Finally, Pinnacle has worked hard at staying abreast of ever-changing formats. Version 11 included support for high definition, and version 12 now includes support for Blu-ray burning. Now you can natively author Blu-ray discs with full motion menus or make AVCHD format discs on standard DVDs to play on your Blu-ray player. Speaking of exporting, with a simple 1…2…3…click, you can upload your finished video to YouTube or Yahoo video, and the program figures the encoding for you.

Including 3 great plugins, and following the SmartMovie guide and Montage templates, a beginner can have a nice movie edited and uploaded within a few hours.