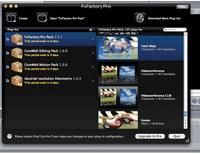 The release of version 2.0 of Noise Industries’ FxFactory Pro, a collection of visual effect plug-ins for FinalCut Studio, Motion and FinalCut Express, gives the skilled video editor a versatile new set of options for jazzing up his or her work. Built using Apple’s FxPlug architecture, the FxFactory product offers something more than just a bunch of effects and transitions.

FxFactory Pro 2.0 is available for download from the Noise Industries website (www.noiseindustries.com) as a 15-day free trial, with the option to purchase the full retail version of the product for $399. The trial comes with several sets of plug-ins preinstalled, and there are additional sets available for download, free and otherwise. The installation onto our system (a Power Mac G5 with a 2GHz PowerPC processor, 2 gigs of RAM and an NVIDIA GeForce 6600 LE graphics card) was extremely smooth. We downloaded a disc image, ran the installation file contained within, entered some information when prompted, and we were done.

FxFactory launched right into its plug-in manager application, a visually pleasing and intuitive interface used to view which plug-in packages you have installed, and enable, disable or modify those packages or the plug-ins contained within. There’s also a handy button for acquiring and downloading additional plug-ins, free or otherwise. We fired up Final Cut and attempted to apply some of the Noise Industries effects to a couple of existing projects. They were located exactly where you’d expect them to be, named exactly what you’d expect them to be named and did what they were supposed to – well, there was a certain amount of experimentation and documentation-checking to see what some of the more oddly-named plug-ins would do, but once we figured out what they were supposed to do, that’s exactly what they actually did.

Checking the documentation was simple, thanks to a prominent and easy-to-use help system included with the plug-in manager. The documentation itself is a little on the sparse side and tends to assume that you have at least some idea of what you’re doing, but it’s perfectly serviceable (as long as you do actually have some idea of what you’re doing, of course). We did find the demonstration and instructional videos available on the Noise Industries website very helpful, both in previewing certain effects and helping us figure out what it was we were looking at.

The included plug-ins are versatile, they look good and they render quickly. We can attribute this last feature to the FxPlug architecture, which uses the processor on your graphics card instead of the central processing unit to do the heavy mathematical lifting. Unfortunately, writing a fair review of video effects and transitions is difficult. It’s a bit like trying to review one of those really big, fancy Swiss Army knives, with the multiple blades and utility tools. Is the model with the skinning blade, magnifying glass, tin shears, lemon zester and nose-hair plucker inherently better than the one with just two small blades and a corkscrew? Can you really honestly review it if you’ve never had to sit around a campfire, zesting a lemon while plucking your nose hairs? Similarly, in our video-editing experience, we’ve never had to use a polka-dot transition, and we’ve never had to generate the distorted, rippling image of an oversized barcode. What we can say is that, if we ever did need to do either of those things, we would be very happy to use FxFactory to do it – and of course the more conventional, commonly-useful effects work just as well. For example, we could see ourselves using the Text Glow effect fairly often for dynamic title cards or captions, and several of the color-correction filters, while not revolutionary, would come in useful in a wide variety of situations.

Even more exciting than fancy effects is the capability to go “under the hood” of the plug-in system. By using the plug-in manager in conjunction with Apple’s Quartz Composer, you can not only fiddle with existing plug-ins, but also create your own new ones just like the pros do. Noise Industries touts this feature as being so simple that you can do it “without writing a single line of code.” That much is true, but despite that fact, creating your own plug-ins is not a task for the beginner or even intermediate user, unless you love to tinker with these types of things.

If you’ve used Quartz Composer or similar graphical node-based compositing engines before, you should be pretty comfortable with the interface, and if you’ve had a lot of experience working with computer graphics and video effects, then you’d know what all the little fiddly bits do. If, for example, you’re familiar with Apple Shake, you should feel right at home. Otherwise, it’s a little daunting.

Noise Industries has assembled a quality piece of software in FxFactory Pro, taken as a whole. The ability to customize the wide variety of offered plug-ins, the expandability offered by the ability to quickly and easily install additional plug-ins, and the seamless integration with FinalCut in specific and the Macintosh platform in general are all strong points in its favor, and the $399 price is competitive. Based on these factors, we can recommend FxFactory Pro 2.0 to the intermediate-to-advanced videographer who wants to apply a wide variety of post-processing digital effects. Let the post-production fun begin!

Mike VanHelder is an IT professional with a sideline in film production.