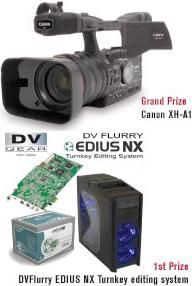 Companies are lining up to give away prizes, but YOU need to get your edit on and start putting those videos together! The entry deadline is October 31, 2008, and the rules and downloadable entry forms can be found on our website.

Along with the entry forms, you can find full contest prize list and complete rules, policies and caveats here.

Full details along with entry forms will be also available in the September issue, which will be on the news stands August 12th.

If you want to really hone your skills and fine-tune your chances, read our Tips to Entering Contests in the April 2006 issue of Videomaker or on our website here. You’ve been warned… Now get editing. 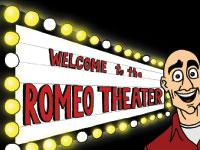 Independent filmmaker John Romeo has created Romeo Theater to encourage other filmmakers to showcase and talk about their filmmaking passion. He invites the public to join in, either to see short films you can’t find anywhere else or to submit their own films.

Each Romeo Theater show presents a short movie, followed by a discussion segment from the director. Romeo adds, “Filmmakers from all over the country have presented their work on the show; it’s a great promotional tool, because it introduces their films to a whole new audience online.”

Romeo says he is always looking for new directors and films for the show, but they have to meet the show’s requirements: under 5 minutes, no copyright infringements, and in the general PG range. The director can put together a 1-2 minute “making of” segment with behind-the-scenes information that will show after the movie. Submission is free, and the directors do not get paid. It’s simply a promotional opportunity. Details can be found on the site, www.romeo-theater.com. 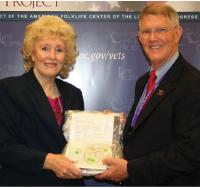 Shirley Bard, a proud member of AARP with little video experience, has taken on a big project that has taken on legs… in a big way.

Shirley wanted to help returning U.S. troops who may suffer from post-traumatic problems by encouraging them to tell their stories and learn from others. Vets from World War II, Vietnam and other battles have told Shirley their stories, no holds barred, and she’s taken these oral histories to the Library of Congress in Washington, D.C.

Passionate to get these vets’ stories recorded, Shirley bought a small camcorder and taught herself how to run it. After recording a few interviews, she realized she needed to edit the video, so she had to teach herself computer skills, then, going a bit further, she bought Studio Pinnacle 8 and taught herself to edit. Now, using Studio 11, she’s created video memoirs that reveal a history of the personal experiences of several generations of wartime veterans. The veterans talk about the day-to-day routine on ships, in barracks and on the front lines, along with some candid memories of the horrors of battle that many of them have never talked about before. These aren’t videos enhanced with effects, music and tons of newspaper clippings. They’re raw in-your-face commentary about life in the military during wartime.

“Some of these vets were so young to have experienced so much horror,” writes Shirley. “These videos let people see for themselves the vivid memories of 17-, 18- and 19-year-old kids who have been thrown into hell and survived…not just physically, but emotionally. Vets are dying every day with their stories never documented.”

Each veteran Shirley focuses on gets a copy of the DVD that is sent to live in the annals of the Library of Congress. You can contribute your own producing skills through the Veteran’s History Project here.

Rootclip, Where you Decide the Next Chapter

Did you ever play that summer camp game where someone starts a story and the next person has to continue the next chapter, followed by another storyteller, etc., until everyone has a chance to make up a chapter? Well, now you can do it with video, and maybe win a prize for your effort.

Sharp-eyed Videomaker reader, Allen Klosowski, sent us a link to a cool new video contest that lets you… or me… or Allen… or anyone… add to the story of a movie being produced.

Erik Luchauer and Kevin Antoine, the producers of Rootclip, shoot the first chapter, and then it’s placed on the internet for video producers to submit their versions for the next chapter.

Luchauer adds, ” Rootclip produces the first chapter (a.k.a. the “root clip”) and users create chapters 2 through 6. Only the winners of chapters 2-5 may submit entries for the final chapter (chapter 6). I also hope to see some of your work on our site. We’re really trying to create a collaborative community and build up the excitement for a new generation of filmmakers.”

After each consecutive chapter’s entries are in, the web audience votes to choose the favorite, which becomes the next official chapter, and then video producers start vying for the next chapter’s selection.

Winners of each chapter get a $500 Visa card, and the final Chapter 6 winner gets to go to Traverse City Film Festival in Traverse City, Michigan, and meet the Rootclip creators, as well as filmmaker, Michael Moore.

It might be too late to enter this contest by the time this issue hits the news stands, but check out the site here for news about upcoming contests and challenges. 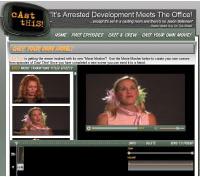 Want to try out your editing skills online? Or maybe just take a look at what can be done with digital video, a funny script and a cast of characters? Check out Cast This! The Game online.

Developed by actor, producer and funny lady, Julia Flint, the shows combine all her loves into one exciting new project: the internet sitcom. Cast This! is a funny, edgy internet sitcom in which Flint serves as the writer, producer and star and invites viewers to participate in the storytelling.

Cast This! The Webisodes get the viewers involved by having them create scenes from video clips straight from the webisodes. Place content on the timeline, add titles, music and effects and create your own movie. Then “send to a friend” and share your masterpiece.

Hands-On Learning with the VM Crew

A collection of video enthusiasts made the trek to the home of the Videomaker headquarters, to attend one of the two workshops we offered this past June. The classes offered were Basics of Video Production and Documentary Production. The weather was perfect, not the normal heat we usually get in June, with a slight breeze that demonstrated the need to use an audio wind screen for our Basic Production group. (And a chance to appear as models in this issue, see Directing – Small Crew Directing.

By the time you read this, we’ll also have finished a few Road Show conferences in Portland, Houston and San Diego.

If you’re like us, most video producers are lonely one-person bands, who learn by trial and error, usually in the wee hours of the morning. The workshops help video producers learn to work with a group, take on various production roles and have the chance to interact with like-minded producers. Most attendees leave with a smile on their faces and enhanced understanding of the production process, and many leave with life-long contacts to assist them in their travels to continue following their dream. There are still several Videomaker -based workshops and traveling conferences being offered this year. Check out our Events Page to find out more.

See the final workshop video that this particular group put together, or video from past workshops. We hope to see you soon.