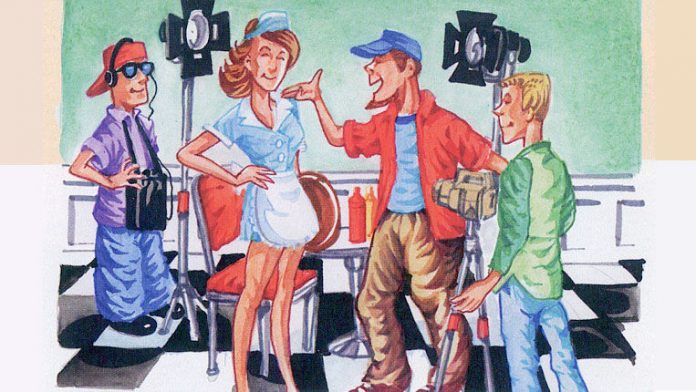 As a one-man-band, you wear many hats, but when your production gets bigger, you have to share the load. But who ya gonna call? Get ready for the name game, it’s “Crew Call” time!

Do you sit through the long list of people during the credit roll at the end of a movie and wonder who all those titles are? Why does it take so many people, and do you need a Best Boy or a Gaffer for your video project? This column looks at crews, the positions you should crew and answer the eternal question: “What is a Best Boy?”

How Big Should My Crew Be?

Video crews range in size from one-man bands, where the director does everything, to crews that fill the end credits of most movies. The crew size depends on several things. The first is the sophistication of the scenes you are going to shoot. You also will need to take into account the amount and type of lighting and audio equipment you will need, the number of actors and the size of the scene you’re shooting. The more equipment and actors and the more sophisticated the scene, the bigger the crew. If you’re working a union shoot, you will also need a bigger crew, because the unions fill very specific jobs with very specific personnel.

If you are shooting interviews or small, intimate scenes, you don’t need a huge crew. A small crew is a director, camera operator, audio mixer, grip and perhaps a boom operator. A very small crew like this would have to wear a number of hats.

The director makes all of the aesthetic and technical decisions for the crew, as well as directing the movements of both the camera and the talent. A good director should be able to wear multiple hats and speak in the languages of the actors and the techies. A good director knows how to work with actors to get the best performance possible, yet also be able to talk lens choice, f-stop and composition with the camera operator. The director should also have a good sense of lighting aesthetics and how to achieve the desired look, and work with the sound mixer to ensure that the audio has the right mix of elements to make it technically clean and aesthetically pleasing.

The camera operators for small crews have a huge job. They must be very aware of the quality of every shot, determine the correct f-stop, lens choice (wide angle, standard, telephoto, etc.), white balance and composition of every shot. They must work closely with the director to make sure they know what shot types, angles, movement and focus the director wants. They must let the director know about any problems with the finished shot. Usually in a small crew, the camera operator and director work together to make sure the lighting is properly set up to accomplish the technical and aesthetic choices for the scene.

Audio mixers are responsible for the sound portion of a shoot. They work with the director to choose microphones, recording device and media, if they are using a separate audio recorder. During the shoot, they monitor the audio levels and listen through headphones to check the quality of the recording and to make sure everything is fine for the post-production process. This is a very important position in the crew. Through headphones, the audio mixer will be able to hear every sound the microphone picks up and, even though the director may not hear the plane crossing the sky or the siren in the distance, the audio mixer should be able to ask the director to do another take due to bad audio.

If the project calls for using a shotgun microphone mounted on a pole, then you need to add a boom operator to the crew. This crew member monitors the audio from the shotgun mic through headphones to make sure there is a good, consistent sound in every scene. If the microphone varies too much in distance from the different actors mouths, there will a distinct difference in the sound recorded, and the scene will be ruined. There is an art to maintaining good pickup with a boom mic. Practice does make perfect!

You will need a grip to round out your small crew. Grips are the muscles of the crew. These are the men and women who move things around, carry equipment, set up ladders, move dollies (dolly grips) and do any other heavy lifting needed. The grip assists with setup of the camera and lights and is the overall worker bee of the small crew.

Bigger Crews: Adding to the Mix

As your projects grow in size and sophistication, you will find that your crew must also grow. The following is a list of crew positions you will want to add gradually to make your projects less hectic and more manageable. It will also identify some of the more interesting crew names found in the film industry.

If you grow to a point where it is difficult for you to concentrate on the shoot and the management of the projects is driving you nuts, you really need a Producer. This is the person who actually works to get the project made. Producers are usually “jacks of all trades” who know the ins and outs of sales and financing, management and business. They also know the video or film industry and have the artistic and technical knowledge needed to bring the project from conception to final edit and distribution. The producer is the hands-on day-to-day business manager of smaller projects and ultimate head of the management team on larger projects. The producer hires everyone associated with the project, acts as a liaison with the executive producer or client and makes sure that the project comes in on time and under or at budget.

The main lighting assistant for the DP is a Gaffer. The Head Gaffer sets up the lighting and other gear needed to control the light. Gaffers work closely with the DP to create the look of the project.

You may decide you need someone to help the DP and camera operator keep track of all of the camera records, as well as help with sophisticated shots. This crew member is a 1st Assistant Camera or 1st AC or Focus Puller. The 1st AC controls the focus while the camera operator watches the shot in the viewfinder. On difficult shots, it is impossible to do follow focus or other focus techniques while also running the camera, so the 1st AC steps in. If there is not a 2nd AC, the 1st AC also handles the camera records, by recording the timecode for the beginning and end of every shot and recording whether the shot was good or bad.

To assist your lonely grip with the equipment, you may need a Key Grip or even a Best Boy. The key grip is the person in charge of all of the main grips. The Best Boy is in charge of all of the secondary grips and gaffers, and yes, he can be a she. This is a holdover title from old apprentice days. The Best Boy was usually the oldest and most experienced of the group. In early film days, film crews were predominately male, and if a director needed assistance on a crew, hed call the staffing office and request the Best Boy available, not a trainee, for an important crew position.

For a large production with lots of equipment, you may have a large gaffer crew to work with lights and a large grip crew assisting with lighting setup and moving equipment. The Key Grip and Best Boy help keep these large crews organized.

To keep the director organized, you may want to hire a Script Supervisor. The script supervisor keeps a very detailed record of the days shoot. He or she maintains script notes and the official record of the shoot – the number of takes, the quality of each take and length of each take. He or she is responsible for the continuity of the shoot. The Script Supervisor or an assistant must photograph each scene before it starts, so that Inside Props can make sure everything is in the right place, hair and makeup are the same and costumes and other things that might change are the same as in the previous take.

While there are many more positions you will note when looking over the end credits for the movies, the positions listed above should be helpful in rounding out your crew needs. Remember, it is better and more cost-effective to have a well-fed, hardworking crew that is efficient and competent than a crew that is short-handed, short-tempered and making mistakes because they are wearing too many hats. Balance is the key. Look over your projects aesthetic and technical requirements, and make sure you have the crew that will best meet them.