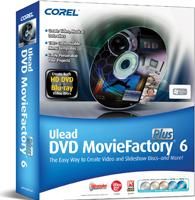 Corel Corporation’s Ulead DVD MovieFactory 6 Plus software is an easily affordable way to create and copy DVDs and CDs and to perform simple but impressive editing and assembling of prerecorded clips. In its deluxe version, it’s one of the first consumer editing programs to support HD DVD, even more remarkable considering its well-under-$100 street price.

The program, developed by Ulead before it was acquired by Corel, is aimed primarily at the hobbyist who wants to edit home camcorder movies and save them to recordable DVDs, in addition to producing audio compilation CDs and data backup DVDs.
DVD MovieFactory 6 is available in two flavors. The standard version retails for $50. A deluxe “Plus” version sells for $30 more and adds full high-definition video capabilities, plus utilities for copying discs and creating audio DVDs, CDs, password-protected data discs, as well as other features. It’s this latter version that we’re reviewing, which requires a PC with at least a 1.8MHz Intel Pentium 4 or AMD Athlon XP 1800+ chip and 512MB (and ideally at least a gig) of RAM. Both versions are available boxed, or for immediate downloading from www.corel.com. There’s also a trial version available on the Web site.

Once the software was installed and the PC rebooted, to get a sense of how intuitive DVD Movie Factory 6 would be for the neophyte user, I did a quickie walkthrough of the program without cracking the manual. First, I booted the program up and clicked on “New Project.” The next screen took me to the program’s timeline GUI.

DVD Movie Factory Plus also supports capture of video directly from a camcorder (including HDV/AVCHD types), as well as the building of slideshows. But for this test, I simply used a couple of short video clips (each about ten minutes) that I had lying around my hard drive. Then I checked out the program’s “Create Menu” box.

The program took me to the next screen, which allowed me to choose from a handsome gallery of pre-programmed menus, each with an alpha channel cutout to allow motion video from the timeline to play underneath the menu. Once I’d chosen, the filenames of the videos I had previously inserted into the timeline were listed on the menu, so all I needed to do was capitalize their spelling. Above the chapter titles in larger text was “MY TITLE,” which I simply edited to the name of this new disc (brilliantly changing it to “Videomaker Test DVD” to explore the end limits of your author and humble narrator’s mastery of creative titling).

Clicking “Next” took me to the final window in the Movie Factory assembly line, which actually burns the disc. This took about half an hour (and remember, we’re only talking about rendering 20 minutes of video), during which my otherwise fairly new high-powered dual-core Windows XP Pro PC was rather well-occupied. There’s a reason why the program has a checkbox allowing you to power off the PC when the rendering process is completed. For longer videos, this may very well be a process best done at night or on lunch break, as the time to render and burn a disc is extensive.

Once burning was complete, my computer’s DVD burner confidently ejected the disc, which I immediately re-inserted for inspection. The end-result was a disc with a surprisingly slick-looking animated menu with both motion video and background music, which my PC’s Cyberlink PowerDVD player had no problems handling.

And that’s about as easy and intuitive as it gets. Of course, more advanced users will want to do more than just quickie video assemblage. Fortunately, DVD Movie Factory Plus is capable of doing much more precision editing on its timeline, including the ability to add dissolves, wipes and other transitions. As with most editing programs, it’s possible to commingle video and still photos, as well as zoom into the stills for the obligatory Ken Burns effect. Video can be enhanced (brightened and sharpened) for improved quality. And audio can be inserted into the timeline for voiceovers, background music and sound effects. The program will automatically adjust output for 16:9 PC monitors.

Belying its easily-digestible price, Ulead DVD MovieFactory 6 Plus is one of the first DVD rendering programs to support the Blu-ray format. The program also comes with free versions of InterVideo’s WinDVD playback software, and InterVideo’s DVD Copy program, enabling users to copy videos and music in three easy steps.

MovieFactory 6 Plus also allows the import, editing and conversion of HDV, DivX and AVCHD formats, which can be output in HD DVD, Blu-ray or traditional DVD-Video formats. There are also tools included for burning data to CD, DVD, HD DVD and Blu-ray Disc, as well as options for creating audio and MP3 CDs and DVDs.

Could Be Just the Factory You Need

Ulead MovieFactory 6 Plus does a variety of functions and does most of them quite well. The key word in the title is “factory.” Obviously, there are more specialized (and more expensive) programs available that allow much greater control over each aspect of the process. But for a very affordable price, Corel’s program could be just what the budding home videographer needs to start converting DV camcorder tapes into DVDs. And at $80 for the full-blown Plus version, it seems worth it to pay the extra thirty bucks to future-proof your PC, even if you’re not yet currently burning HD-DVD discs. Because chances are, you will be, sooner than you think.

Corel’s acquisition of Ulead and InterVideo pays off with an easy-to-use, affordable editing/authoring program that will find a wide variety of uses and audiences.

Ed Driscoll, Jr. is a freelance journalist covering home theater and the media for the past decade.