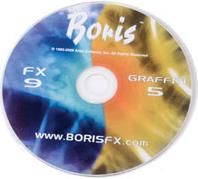 Boris is a name known to many editors who work with animated titles. But the “Boris FX” series does much more than bounce your son’s name around like a basketball. The new Boris FX 9 is an advanced level plug-in and application for all kinds of editing fun. If you are thinking of making custom transitions, 3D titles, or motion tracking, it has you covered and then some. Did we mention Boris FX 9 is compatible with almost every editing software out there? Well, it is!

Boris FX 9 is available on both CD-ROM disc and in downloadable form at www.borisfx.com. Currently, Boris is offering a free demo version, also downloadable at its web site. We quickly install FX 9 from our disc, and away we go. As we install the software, the plug-in “components” are automatically checked off for installation, to be used within our editing software. We are also prompted to install Boris FX 9 as a stand-alone application. We choose to install both, to see what new interface differences, if any, there are. If you do not have a supported NLE for the “components,” don’t fret. You can still install the full, stand-alone version of Boris FX 9.

Boris FX 9 is now compatible with over 20 editing software programs. So unless you are using some home-brewed editing platform from the early 90s, there’s a great chance it’ll work. As a plug-in, Boris FX 9 first shows up as a new filter, adding to the list of our other editing filters. It appears as its own effect, and does not change or enhance our other effects filters. We simply scroll or search our effects tab when working with our program. Applying Boris FX uses the same process as applying a filter such as a standard blur effect or cross-dissolve. We just select our video clip in the timeline, and select the folder labeled Boris. After applying the effect, we noticed how many options open up for creativity.

Boris FX 9 ships with 115 filters, hundreds of animations, and more 3D shapes than you can possibly throw a stick of RAM at. For example, you can also certainly use Boris FX 9 next to unsupported apps like Adobe’s Premiere Elements, or Apple’s iMovie applications, if you so desire.

As a stand-alone application, it’s powerful and intuitive. Although, don’t expect the same smooth integration you would from using the plug-in “components” with Premiere Pro, Vegas, Final Cut, or Avid Express.

It is noteworthy that, no matter how you choose to use Boris FX, many third-party plug-ins work even inside of Boris FX. These include any Adobe After Effects plug-ins you may have lying around. So, plug-in those plug-ins!

The Boris FX interface pops up, filling our computer screen with a sleeker but familiar look. The interface has definitely been revamped for FX9. In past reviews of Boris FX, we wrote that the user interface was lacking. Not so, now. All windows can be dynamically scaled to size, and the tabbed workspace with new customizable buttons is slick.

The integration of Boris menus into our NLE’s menus has become seamless. As we tweak our filter, real time previews are available thanks to the OpenGL acceleration built in. We add color correction, a page peel, and motion blur effect to our video. All are precisely keyframeable and adjustable way beyond what our NLE’s plug-ins are capable of. On our iMac G5, this was pushing the limit for smooth playback. Saving our effect and closing the Boris FX interface puts us back into our NLE. Our video clip retains all the adjustments we made, and it can be watched from the timeline right along with the rest of our video. Nice.

Boris also includes motion-tracking effects. For your video, you can blur out that pesky logo on a moving subjects’ sweatshirt with only a few mouse clicks. Boris can accept multiple points on your video, which it can average for the best possible movement. The motion-tracking feature also comes in handy if you’d like to enhance a sky, take out or replace a loud billboard sign, or add just about any 3D object to your video.

Though Boris FX is easier to use than ever, one thing we found difficult was that shuffle between the Boris interface and our NLE. As it stands, we had to save our effect or completely close Boris FX to be able to do anything back in our NLE. This is important if you are in the middle of creating an effect and need to scroll through your NLE’s timeline. This didn’t limit us from getting what we needed to get done, but it is worth a mention here.

Boris FX has been used in conjunction with pro apps for years. Boris FX 9 shows what a number of well thought-out upgrades can do: create a smooth and fast visual effects package for those in need of fine control. That’s something Visual FX artists will love.