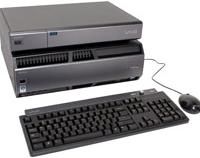 In what may be the most revolutionary machine that’s crossed our threshold in a long time, Sony has shipped the VGC-RM1 editing computer. It utilizes a radically different hardware design than we’ve seen before, but one whose time has come. It’s the first machine we’ve seen that ships with Windows Vista (though it’s certainly not the very first machine with Vista – the way that operating systems launch, it’s unlikely any single product can make that claim). It’s also the first Blu-ray Disc burner-equipped machine to come through.

The first thing we noticed in setting up the RM1 were two boxes, along with a 6′ long cable. The cable allows the placement of the main CPU somewhere else – probably under your desk. (You still have to consider the machine’s airflow needs, though.) Inside this box is an Intel Core 2 Duo 6600 processor running at 2.4GHz, 2GB of RAM, an NVIDIA GeForce 7600GT video card and four 250GB Seagate SATA hard drives, set up as two stripe sets. The drives are easily accessible from the front panel, but are not hot-swappable (so you will still have to shut down the machine if you need to make changes to the drives, but you won’t have to move too much stuff around in your work area).

The smaller box (which Sony calls the Access Unit), contains both of the machine’s optical drives (our machine shipped with a Sony DDU-1615S DVD-ROM drive and a Panasonic SW-5582 Blu-ray Disc burner) and is scarcely taller than the drives it contains. The Access Unit also includes a reader for all of the major types of memory cards, 2 USB ports, a 4-pin FireWire port, Bluetooth and drive status indicators, mic and headphone jacks, and a power button with indicator. Other goodies in the box include a unique USB shuttle control with a joystick in the center and a set of Logitech X530 speakers. The array rounds out with a standard USB optical scroll mouse and a PS/2 keyboard.

As previously noted, this is the first machine we’ve seen that includes Microsoft Windows Vista – more specifically, the Business edition of said operating system. We found the first boot to be a bit time-consuming (but apparently much less time-consuming than other new Vista-based machines we keep reading about) as the computer detected devices and the bundled trial of Norton Internet Security downloaded updates. Windows Vista is a visually appealing operating system that has a lot of subtle, genteel sounds associated with events, but it still has some rough edges. For example, when we needed to unzip a file with Vista’s built-in compression utility, it took a bizarrely long time, saying that it would need three hours to decompress a 100MB file. We installed 7-Zip, a free compression utility, and it easily decompressed the file in seconds.

The rest of the software collection is an amalgamation of interesting choices, including Adobe Reader 8, Adobe Photoshop Elements, Microsoft Works 8.5, Microsoft’s PowerPoint viewer, and a 60-day trial version of Microsoft Office 2007. Blu-ray Disc specific programs include Corel’s InterVideo WinDVD BD for Vaio and Ulead BD Disc Recorder. Our machine also had MobiTV, Napster and starter versions of Intuit QuickBooks and Corel Paint Shop Pro, along with links to CNN Pipeline and Gametap – proving that the machine is indeed capable of both working hard and playing hard. Sony’s own DVGate Plus and Click To DVD software are included with the system as well.
Although Vegas is under a different division, Sony Media Software, Sony opted to bundle the RM1 with Adobe’s Premiere Pro 2.0 editing software. There are currently some issues between Windows Vista and Premiere Pro, however – as soon as we launched the program, we got an error message about direct sound input not being supported, and that recording audio would not be possible. Once we clicked through that and started a new project, the program immediately froze. The solution, as it turns out, is to attach a mic to the machine, and to leave it attached. (Strangely, attaching a mic while the machine was running caused it to completely crash.) This workaround made Premiere Pro happy – we had no further issues with the software.

Fire, I’ll Take You to Burn

We tried a little experiment with burning some content from HDV to a Blu-ray Disc. We successfully captured HDV via a Sony HDR-FX7 with Sony DVGate Plus, a slightly confusing but very versatile capture tool. That yielded a smattering of M2T files (MPEG-2 transport stream), one file per press of the camcorder’s start/stop button.

We fed these files to Corel’s Ulead BD Disc Recorder, a simple program that generates simple discs, but just having the power to give someone HD content on a Blu-ray Disc (or a disc of any type, really) should be a powerful-enough feature to stand on its own. The program claimed that it was performing some transcodes, but the process was so fast, we think it probably didn’t actually have to do much of anything to the HDV clips we imported. (We later tried Roxio’s DVDit Pro HD, reviewed elsewhere in this issue, to further exploit the Blu-ray Disc burner in this machine.)

To play back our freshly-burned BD-RE of HDV footage, we launched Corel WinDVD BD for Vaio. Strangely, it wouldn’t play our Blu-ray Disc. We took the opportunity to install CyberLink’s PowerDVD Ultra, which happily played back the video (but didn’t output any audio). Just for giggles, we tried WinDVD BD again, and we got both audio and video! This means that we encountered a strange little codec issue lurking there. We expect a patch to address this should be out before long.

Overall, we found the Vaio to be a very well-executed machine. While our first experience with the gold version of Vista leaves us wanting more, it is undeniably a useful operating system. We are anxious to see more machines using this great split design – this is one of the most innovative computer designs we’ve seen in quite a while.

A truly cutting-edge workstation for all of your HD video needs.