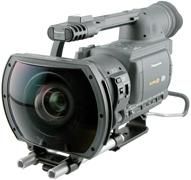 $3,350 each (support system and camcorder not included)

Creative’s Video Blaster is an analog video capture device with an onboard LSI Logic DoMiNo media processor, supporting a Turbo Rendering mode for rendering MPEG-1, MPEG-2 or DV at speeds claimed to be up to 40% faster than even a performance desktop PC. The Video Blaster utilizes a USB 2.0 connection to a desktop or notebook computer.