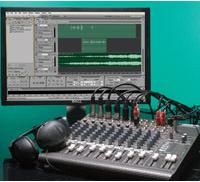 Mixing requires two independent disciplines: the nuts and bolts of signals, levels and processing, along with the art of listening and comparing the results.

Mixing audio is all about balance: balance between individual elements and between the music, sound effects and dialog. There’s even a balance between edited takes of the same scene.

To use a food analogy, the average person might put a collection of foods in a blender and pulverize the whole thing. On the other hand, a chef will carefully fold ingredients together, paying close attention to quantity and order. The difference in the results should be obvious. Most people grasp one mixing discipline better than the other, but knowledge of both will help make better mixes.

Into the Time Machine

If you’ve never mixed audio for video the old-school way, it’s easy to take our modern conveniences for granted. Here’s how it used to work. The project was shot and edited on tape – analog tape. No computers or FireWire, just thin bands of magnetic tape in chunky video decks.

The editor would scrub through the raw footage by hand, assembling an edit on another video deck one real-time piece at a time. That was fine for a basic edit, but what if you wanted to include a voice-over, background music or sound effects? Most editing decks allowed you to overdub audio on one of the two, three or four channels available. This was a hit-and-miss affair. If you got it wrong, you did it again till it was right (or you gave up). If you actually wanted to mix the audio, it got recorded on an analog multitrack deck. You built elements on the tracks and mixed them by memory, making fader and knob moves in real time. When it was time to make the master, both the audio and video decks were synced with timecode and, if all went well, the final version was recorded. If this sounds incredibly complicated, it was, but it was the only way to get the job done. Only the mega-studios and production houses had automated mixing.

Today, everyone has access to automated mixing. Depending on your audio and video software, you can easily accomplish static and dynamic mixes and save them with your project. It’s simple to manage multiple audio tracks along with their associated plugins, volume and pan settings. Everything stays exactly where you put it, and it will be that way tomorrow, next week or next month. These powerful features remove much of the worry and difficulty of mixing audio for video. That leaves you with more time to concentrate on the sound of the mix.

There are several ways to mix audio for your video projects. Your video editing app likely offers two or three methods. The first (crudest) way is to normalize track volumes to something other than optimum. Most video editing apps allow you to normalize an audio track to some arbitrary amount of boost or cut. If something is too loud compared to the other items in the mix, simply normalize 3-6dB lower than your current setting. Admittedly, this is a quick and dirty method, but it offers quick results. A second (more elegant) method is the built-in mixer utility. Some programs offer volume adjustment on the timeline, while others use a separate mixer window. Regardless, this method looks and acts like a real mixer and allows adjustments to all the audio tracks in your project. The final mix method requires setting markers or keyframes at specific points in your mix and drawing volume changes. This can be done over broad areas or in very small instances. You can also set points as necessary to achieve a quality mix.

Alternatively, you can mix in an audio-only package and export the results to the timeline. This requires exporting any audio you need from your timeline and then importing it into the audio software. Add other audio elements on their own tracks for maximum control. Now you can use any of the mixing tools from the audio application to craft your soundtrack. This includes the mixer, automated fades, mutes and audio-specific plugins. Once the mix is complete, export the soundtrack and import into your video editing app, making sure to mute any original tracks. If you’re using Adobe Production Studio products Premiere Pro and Audition, you can even import the session file from Audition and go back to make tweaks as needed. [Editor’s note: Audition will be replaced by Soundbooth in the Adobe Production Studio. At time of publishing, however, Soundbooth was still in beta.]

EQ to the Rescue

Volume adjustments are just one part of the mixing formula. Equalization plays a critical role too. In professional music mixing, it’s common to apply EQ to each instrument, creating a specific place for it in the audio spectrum. This makes it easier to make out parts and keeps the mix less cluttered. If you need an example, check out any Steely Dan song. You can use this same technique in your mixes. It requires some experimentation, but it generally involves filtering bass frequencies out of parts that don’t have much bass and removing highs from parts that don’t emphasize that portion of the spectrum. For video mixing, that usually means filtering dialog and sound effects for clarity.

We’ve spent most of our time discussing the mechanics of mixing, but there’s another side. The art of mixing is very subjective, and there is no formula or checklist that will guarantee a brilliant mix. Mixing audio requires lots of careful listening, adjusting and then more listening and adjusting. You also have to know when to stop. With the convenience of automated mixing, you could spend days, weeks or months refining a mix. Clients tend to grow impatient or angry waiting for you to craft the perfect mix. You should, however, listen to your mix on several different playback systems – specifically the type of system your viewers will use. If the piece will end up on the Internet, encode a cut, upload it and listen online. However you check your mixes, make notes on anything that sticks out. Take that information back to the edit suite and make any necessary changes. Repeat the process till you’re happy, then lock the mix.

Many inexperienced producers just throw the audio elements on the timeline and call it good. A quick listen to any movie or network program will reveal a much more complex mixing situation. Fortunately, today’s production tools offer everyone a chance to produce a rich, fully-mixed soundtrack.

Professional-sounding audio doesn’t come easy, but with some quality time and some projects under your belt, your video sound mixes will begin to shine.

Contributing Editor Hal Robertson has been mixing audio since he was 14. That was 1977. You do the math.

Side Bar: The Analog World

This article focuses on digital mixing in a media production environment. Don’t forget that all these methods and models originated in the analog world, and it’s likely you’ll have to use an analog mixer from time to time. Large events, musical productions and church services are examples of projects where the real and virtual worlds rarely intersect. But don’t be intimidated; just take what you’ve learned and apply it to real knobs, buttons and sliders. They work and sound a little different, but the principles are the same. Double-check your mixes with headphones, and remember – it’s all about balance.