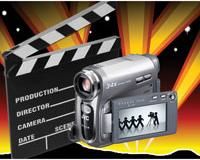 Even ten or fifteen years ago, if you wanted to make a feature film, at the very least you had to shoot it on 16mm, like Steven Soderbergh's Sex, Lies and Videotape, and then have it carefully blown up (transferred) to 35mm if you got a major theater release. All of this cost thousands and thousands of dollars and put moviemaking well out of the range of nearly any single individual.

Movies on the Cheap

Then The Blair Witch Project happened and two young, recent film school grads from Maryland showed the world that, if you had a good story, you could make a movie for $20,000, using an RCA Hi8 camcorder from Circuit City. Still, the movie looked like it was shot on consumer equipment because, well, it was. Then in 2003 came Open Water, Chris Kentis' feature-length drama about two divers marooned in shark-infested waters, shot on Sony DCR-VX2000 and DSR-PD150 camcorders at a cost of $130,000. Heidi Ewing and Rachel Grady shot their Academy Award-nominated documentary Jesus Camp on Panasonic AG-DVX100A camcorders in 24p and cut it with Avid Xpress Pro, all for less than a million dollars.

All the while that consumer equipment was moving up in quality, screening environments were moving down. Instead of watching movies at the Multiplex, projected forty feet across, people were now watching movies on their home theaters, on their iPods, on 5-inch portable DVD players and, maybe most importantly, in 320×200 YouTube.com windows.

When Burnell Yow and Betsy Alexander's cat, Nora, started playing the piano, they had no thoughts of becoming media celebrities. Burnell used his Sony DCR-HC42 to record some video of Nora tickling the ivories. He edited together a 2:42 clip, using iMovie on his Macintosh, and uploaded it to YouTube, so that their niece in Jackson Hole, Wyoming, could see it. A month later, more than one and a quarter million people had viewed Nora's musical antics. (See Nora at www.ravenswingstudio.com.) She'd been on television in Japan, China, Lebanon, Spain, Germany, New Zealand, Pakistan, the UK and Italy. "We had three TV news crews here in one day," said Burnell. "We could have had four, but decided that Nora needed a rest." Burnell and Betsy found themselves doing radio interviews and fielding calls from magazines (including this one). This is the kind of attention and coverage moviemakers dream of but never achieve.

But what if you don't have a cat that likes to play the piano? Betsy and Burnell's video success came through blind luck. Not so for Aaron Yonda and Matt Sloan, two moviemakers from Madison, Wisconsin, who wondered what it would be like if someone who looked, acted and dressed like movie villain Darth Vader was the day manager of a local supermarket. The result, Chad Vader: Day Manager, launched the pair into a protracted Internet superstardom with their well-written and very well-produced series of shorts that cost about $1,000 each. The success has been enough to launch them over the first great wall of moviemaking: they were able to quit their day jobs.

Aaron and Matt's low-budget indie success came from a solid understanding of their strengths and limitations. They couldn't afford exotic locales or expensive sets and didn't stretch their budget trying. Instead, they used what they had access to – a supermarket and a lot of wit.

It All Starts with the Script

The first place to look in keeping your budget down is your script. If your finances don't allow for the stunt men and equipment required for shooting a car chase properly, you can save yourself much aggravation by having Popeye Doyle wander into the police station looking haggard and remark, "That was one incredible car chase!" "Why, you almost ran over a woman pushing a stroller!" his grizzled companion will remark. There is a lamentable example of not spending quite enough money on a scene in the 1997 film, Kiss the Girls, starring Morgan Freeman. The movie opens with very cartoonish CGI of an elaborate automobile accident, much to the detriment of the rest of the movie, as it shakes the viewer's suspension of disbelief in the first five minutes of the movie. Much more powerful is the auto accident in M. Night Shyamalan's 2002 sci-fi film Signs, where Mel Gibson happens upon the crash scene that takes the life of his wife, played by Patricia Kalember, soon after it's happened. This is not to say that Shyamalan was trying to save money by not having to film a crash scene, but rather that, in the hands of a good director, a scene with no action whatsoever can be extremely dramatic and have more impact than a poorly-done action sequence. Plan accordingly. Use your brain to cover the shortcomings of your budget, not the other way around.

How to Make a Movie: Bare Essentials

How to Make a Movie: Cheap Ending

The absolute minimal requirements to make videos are relatively inexpensive. The important thing is recognizing the limitations of your budget and equipment and working within them. You should never be afraid of the quality of your gear if you are sure of your skills and techniques.