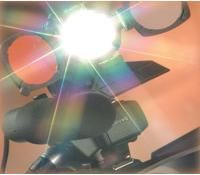 Whether you’re trying to improve an otherwise impossibly dark shot or add a little pop to an adequately lit scene, an on-camera light is a critical tool.

January. It’s cold, the air is crisp, and the sun is a tiny bright speck of light in the southern sky. This pretty much describes the quality of an on-camera light used by an untrained operator. It is a crisp speck of light that shines right in the middle of your subject’s face, casting harsh shadows and freezing the expressions onto your videotape to be recorded for the generations. Now, this harsh reality does not have to be. As we know, January too will pass. By using some of the suggestions and tips in this column, you will be able to turn what can be a cold, nasty light into a warm, soft integral tool in your lighting toolkit.

As with the month of January, on-camera lights do have a purpose. January sends us snow for skiing, ice that then melts to become life-giving water in the spring, and cold harsh weather to give us an even better reason to snuggle up in our warm homes with our loved ones or play with our new video cameras that we got as a holiday present. On-camera lights give us the ability to shoot breaking stories in the middle of the night, follow the bride as she prepares for her wedding or record the grandparents as they launch into a story of days gone by. You can also use them as eye-lights to add sparkle to your subject’s eyes when shooting outdoors with the sun as your backlight. In short, on-camera lights are always there when you need them to illuminate the scene. Wherever your camera goes, so does the light.

To understand how we can make on-camera lights more subject-friendly, we need to know a little more about them. On-camera light systems can range in price from no cost because they are built into your camera to well over the $1,500 professional models. The on-camera light system consists of three basic elements: the light, its mounting system and its power source.

On-camera lights are usually very small hard lights that throw an intense harsh light towards the subject you are shooting. The light itself can range from the type that is actually built into your camera housing, to an inexpensive spotlight mounted in the accessory shoe on top of your camera, to a fairly expensive system that includes multiple lighting heads with different powers of light, a dimming system, spot to flood adjustment, diffusion panels and color correction. In the end, the more you use your on-camera light, the more you should probably budget for this handy tool.

When looking at what kind of on-camera light you should buy, you need to think about what you use it for. Small, intense lights can come in handy when you need to supplement the light on your talent’s face when shooting those interviews on the bright ski slopes. The bright hard light reduces the shadows on their face and adds a sparkle to their eyes. The majority of reasonably priced, on-camera lights have a color temperature of 3200K, equivalent to indoor light. When you are shooting outdoors, you’ll want to consider a blue gel or related accessory to get a more balanced lighting environment. Unless, of course, you’re shooting at night (in complete absence of light), then your on-camera light won’t need to mix with any other lights. If you shoot interviews or work with reporters, you will need a light that is intense enough to be a key light, yet one you can diffuse to soften shadows on the reporter’s face. Reporters need a light that will fill their faces without blinding them while they look into the camera and tell the story of the hour.

The mounting system is perhaps the most important part of an on-camera light system. Some models mount directly to the top of the camera using its accessory shoe. You can mount others using a bracket that attaches to the tripod head. Still others have their own bracket system that attaches to a light-stand post or an on-camera post adapter.

As with the light itself, the kind of mounting system you need depends on how you plan to use the light. If you use the light primarily as a fill/eye light, you can get away with the light mounted directly to the camera’s accessory shoe, sitting right on top of the camera. However, if you use the light as your key light, you must use a mounting system that raises the light above the camera and hopefully moves it to the side of the camera, more in the position of the traditional key light. Not only will lifting the light above the camera take the light directly out of your subject’s eyes, it will create a more pleasing shadow on your subject’s face. If you can mount the light so that it is also off to the side, you will get an even more pleasing shadow that is more in line with the traditional key light you see with standard lights.

Another consideration when looking at on-camera light systems and their mounting capabilities is their ability to use accessories. If you shoot a lot of interviews using the on-camera light as your key light, you will need a mounting mechanism that enables you to use barndoors, add diffusion gels or scrims, use softboxes or light diffusion panels or add color correction filters or gels.

Lighting reporters requires controllable lights, so you are not also lighting up distracting backgrounds or over-lighting the reporter and losing all of the background, so they appear to be standing in a blank wilderness. When shooting weddings, you need to control the light on the bride’s face without causing the wedding gown to glow. By using a graduated scrim, barndoors or a graduated neutral density filter, you can reduce the amount of light falling on the dress while lighting her face with a soft diffused light.

These accessories are essential for controlling the light and giving you a light that is soft, controlled and more like a traditional key light. The combination of a soft diffused on-camera light mounted on an arm that lifts the light above and to the side of the camera will eliminate the “deer-in-the-headlights” look you often get when using a standard on-camera light.

The power source for the on-camera light is very important. Lights that use the power from the camera’s battery suck that battery dry very quickly. If you use an on-camera light system all of the time, it only makes sense to find a system that uses an external battery pack. Lights that plug into a battery belt or small clip-on battery pack last longer, and don’t drain your camera. However, battery belts can be extremely heavy.

Now That You Have It, How Do You Use It?

Shooting with an on-camera light is not as easy as it sounds. Yes, it is ready to go everywhere you and your camera go, but just like winter weather, it is fickle. If you get too close to your subject, you can cause the face to glow and the eyes to squint. Step back and recompose your shot. You might only need to bounce the light off the ceiling.

On-camera lights can also be a bit unwieldy. If you are shooting handheld, make sure that you tighten the hand strap extra tight. You might also consider using a monopod if you need the maneuverability. If you are using a tripod, you may notice that the balance of your camera is thrown off by the on-camera light. Re-balance your base plate on the tripod to compensate.

As you can see, just like the January cold, the on-camera light does have its uses. Examine your needs, choose your system, practice with the accessories and go to work! Add a bit of sparkle to your subject’s eye on those cold January days.

When shooting with an on-camera light, you will have to deal with the weight of the light’s power source. It may not seem like a lot of weight when you first place the battery belt around your waist or strap on the battery pack, but after a few hours of shooting, that extra weight can take its toll. If you can, wrap the belt around your tripod during times when you are shooting stationary interviews or hook the battery pack to the tripod’s leg. If you have to constantly be on the move, wrap the power belt over your left shoulder like a bandolier or shift the battery pack to different places on your belt to give each side of your body a bit of rest.