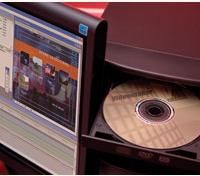 An Introduction to DVD Hardware and Software.

It’s nothing short of astonishing; the level of technology that’s currently available for literally anyone who wants to produce DVDs has grown tremendously. If you have any doubts, just compare the video editing equipment-hardware, and especially software-available today from $100 to a $1000 to what was available 25 years ago. (The era of 12-inch laser discs. And trust me, you weren’t editing them on your TRS-80 back then.)

But there’s always a trade-off, of course: the number of programs and their varied purposes can seem overwhelming at times. So let’s try to break down what some of the options are.

These days, all-in-one suites, which can transfer and edit footage from a DV camcorder, create DVD menus, and then burn the entire production to DVD, have never been more powerful. Sometimes deceptively so: Adobe has designed the initial appearance of its latest incarnation of Premiere Elements to be as non-threatening as possible for newcomers to video editing. And yet, lurking just underneath its interface is a powerful editing machine capable of handling a variety of aspects of video production.

In addition to burning video for DVD distribution, newer all-in-one programs can also create video podcasts (using slideshows, full motion video, or both). As podcasting sites such as Apple’s iTunes and clip-oriented sites such as YouTube and Google Video grow in popularity, these features will become increasingly important tools for promotion and distribution.

However, DVD is still the primary method of distribution for most video producers. Which is why it’s important to check a program’s menu production features. Having a variety of professional-looking menu templates can make your life easier, especially if you’ll be cranking out a lot of similar projects. Many programs come with default DVD menus to choose from, but their quality and flexibility vary widely.

Check to see that those menus look like something you’d be comfortable releasing to clients, and whether or not they offer sound, still pictures, moving video, and other touches we’ve become accustomed to seeing on the menus that accompany Hollywood films on DVD.

Sound is 50% of the Experience

While production suites may have stout video editing capabilities, their sound editing and audio production features are often somewhat basic. When mixing down to DVD, give some thought to what most of your productions will be mixed in. Mono or two-channel stereo won’t be a problem for most editing suites, but not all programs can handle surround sound, although it’s becoming more common.

There’s also mastering video, of course. Beyond basic editing programs, DVD mastering suites such as Sonic Solutions DVDit Pro series allow for more mixed-media approaches. These programs assume that a certain amount of video editing and preparation has already been done, and are geared towards taking the video onto the mastering stage. They can create the sort of multimedia discs we’re used to seeing from Hollywood studios for blockbuster titles. You know-the ones with not just the core movie, but also a PDF file of the script, an MP3 of the theme song, and JPEGs of the stars. Many of these programs allow for the insertion of such nifty features as direct links from DVD menus to Web sites, hi-definition video, high resolution stills, MP3s, flash, documents, presentations, spreadsheets, executables and many other types of files

Whether it’s a video-or audio-oriented editing program, most multimedia programs require a fair amount of processing power and memory. This seems obvious, but make sure your computer has the horsepower to handle the program you’re considering-and be prepared to upgrade if it doesn’t.

Assuming your computer is up to snuff, it’s time to check out the program itself you’re considering purchasing. Perhaps its most important element is its graphical interface. How comfortable you are interacting with it will determine how happy you’ll be with the program as a whole. Some programs offer a degree of customization, and it might be worth exploring how much you can tweak an interface to make it your own. Some suites offer deceptively simple looking GUIs (Graphical User Interface), which are deliberately designed to be as non-threatening as possible to newcomers to video production.

On the other hand, sometimes, a simple GUI really is the mark of an under-powered program. Searching for a broad array of user feedback online before purchasing a program is always a good idea, of course. And check online for screen shots from various programs. A confusing interface to one person might be a sign of great functionality to another. Also, these days, most programs will have a free trial you can download from their respective Web sites. There’s no better way to know if you’re comfortable with a particular interface until you’ve given it a test drive.

Which Do You Choose, the Hard or Soft Option?

Having taken an, alas, all-too-quick walk through the software world… space-or the lack thereof-requires us to take an even faster journey through the hardware-based equivalents, which are divided into two main categories: duplicators and burners.

The same manufacturers typically make both types of units as internal DVD drives-the big difference is in the quantity of discs the units are designed to churn out in a single session.

For one-shot duplication up to small quantities, burners are fine. But if you frequently need to produce dozens or hundreds of discs, you want a better, more efficient solution, which is where DVD duplicators come into play. These devices are designed to crank out many multiple discs simultaneously-often even while unattended.

Automated systems are also becoming more common for low-run requirements. If you’re religiously making runs up to 25 copies, there are several cost-effective systems available. You won’t need to be making hundreds of thousands of discs to justify this solution. Additionally, many of these systems allow you to add components as your needs grow. You could have an automated DVD burning system and then at a later date purchase the complementary DVD printing solution.

Of course, we can’t have a conversation about DVDs these days without meddling in the topic of high definition optical media, namely Blu-ray and HD-DVD. While the cost of these burners is still quite high and consumers with playback devices are still quite few, we expect the first quarter of 2007 to bring about a prosumer offering a little below a thousand dollars. That may have a few of you early adopters lightening your wallets. While it still will cost you an arm and a leg, at least the ball is rolling in the right direction. However, you’ll have to keep you eyes and ears attentive as to who’s going to win the format war.

Mix and Match for Maximum Satisfaction

With all that in mind, check this buyer’s guide to review your options for DVD production and mastering programs and hardware. Which you choose will depend on your computer sophistication and goals. Chances are, you may want to mix and match with both hardware and software, for maximum versatility.