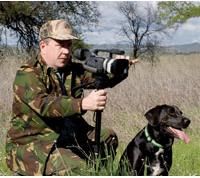 So, you want your video to look more like film. Well, there is more to it than flipping a few switches or purchasing a special model camera. Many a squawk has been heard over this topic, and most people either land in or out of the pond on the issue. There are those that say video will never look like film and those that insist that it is so close no one can tell the difference. Well I'm here to tell you, that if it walks like a duck and flies like a duck: It must be a duck. Or else, you've done a bang up job of fooling the quack out of everyone. That is what Hollywood is doing more and more everyday. Their style of fooling everyone, however, has less to do with electronics, and more to do with movement, lighting, and filters, as you will see throughout this article.

The largest, most important thing you can to do to get the film-like look (Notice I call it "film-like"–video can never recreate film exactly, because of the organic grain structure of real film) is to slow the frame rate down. A couple of today's video cameras have a feature called 24P or 24 progressive. The reason this speed was chosen, was that film cameras capture their images at a rate of 24 frames every second, 6 frames/sec. slower than video. Each frame is captured as one solid picture. In video, we call this full frame capture Progressive Scan. (Normal TV only captures ½ of a picture at a time and we call that Interlace Scanning.) Lock these two away because the "P" in progressive and the "I" in interlace will be tossed around a lot in the future as we get closer to the HD world. The sooner you know the difference, the sooner you will be ahead of the flock. Be careful though, when it comes to purchasing a camera with this feature.

Be aware, that many camera companies are approaching "24p" in different and "creative" ways. Some cameras use a combining technique to derive a full frame capture by putting two of the "same" ½ pictures together and then call it something like Frame Mode. Others emulate "24p" by dropping random frames. The difference between using a real full frame, 24p mode, or a derived image is as different as using real a real duck, or a decoy. From a distance they look a lot alike, but put them side by side and the real duck will soar.

The next most important way to create your film-look is movement. Not only movement of the camera but also movement of artifacts within the capture of the image. Slowing the default 1/60th of a second shutter speed to 1/48th emphasizes motion when recording, by blurring the image when you pan or zoom, much the same as film. Actually, moving the camera while shooting is where the real Hollywood magic happens. Putting your camera on devices that roll, boom or float gives even the simplest of shots a high-end production film feel. You don't have to spend a lot of bills either. Anything that moves, e.g. skateboards, shopping carts, scissor lifts, escalators or wheelchairs, can make a huge difference. However, if you have the budget, I have found many commercially made products from companies such as MicroDolly, Indie-Dolly, Steadicam, Libec, Glidecam and VariZoom, to name a few, that have smoothed out the rough spots and made my job a lot easier.

Another big player in making the film experience happen for video is lighting. Most smaller productions don't have the resources to light like a feature film, but you would be surprised at what can be learned from watching and analyzing how the big guys light. Is the backlight strong or weak? Is there a color theme (e.g. background color changes whenever the villain is seen)? Where do the shadows fall? Are they hard, or soft shadows? Try watching a piece of a movie, and then a reality TV show. Very quickly, you will see that light plays a key role in film's magic bag of tricks. Try lighting for depth by alternating your light and dark parts of the scene, e.g. light your subject with a dark background. Behind them light a small vase. Behind the vase have it dark. Farther back still, light a painting on the wall. And so on, and so on. The more dark to light layers you have the deeper the image looks and the more like film.

Another way to turn your ugly duckling into a swan of a production is with filters. There are three main types of filters: color altering, image enhancing and special effects. Color altering filters can add, subtract, or enhance certain colors your camera sees, making the image warmer, cooler, more vibrant or subdued. Image enhancing filters can soften, blur, remove glare, or increase the contrast. Special effects filters, give that WOW! factor and are rarely used except for unique circumstances. I personally carry one of each, an 812 warming, an ultra polarizer, an enhancing, and a very slight softening filter. I also like a tobacco gradient for making those "not so spectacular" sunsets, spectacular!

Color filters are as diverse as the colors of the rainbow and softening filters are no exception to the rule. As you have probably noticed, film has a softer look than video. Most of that is due to the reduced shutter speed, but some is due to softening filters. Because of the myriad of filter types, my best advice is: less is more. When you find a look you like, stick with it. Too much diffusion, and it looks like a bad soap opera. Not enough, and you're wasting your time.

TIP: Professional filters and matte boxes which hold the filters, are now available for prosumer cameras. For smaller cameras, you might try still photography screw-on frames that allow slide-in filters (similar to the Cokin Filter sets).

Electronically adjusting your gamma is the final, and most complex, change you may wish to make to your camera (and one that truly takes a lot to master). Only a few high-end prosumer cameras have this capability to date, but it is still worth mentioning. In layman's terms, when you adjust your gamma, you are adjusting your camera's sensitivity to the bright and dark areas of a scene. Film has greater latitude in both directions than video, so if you want to imitate film more closely, you must stretch the gamma in one or both directions. Most cameras are set up to look like video, not film. Therefore, going in and tweaking these items is the only way to change that look. Keep in mind, however, that when you mess with your gamma, you are really messing with your camera. Write down all the original numbers before you start, so you have a reference to go back to. Try recording a little video of a scene then make your adjustments. Record a little more and compare. This goes for all your settings: such as Chroma, master black, etc. Tweak. Record. Compare. Tweak. Record. Compare. In other words, read your manual and take it slow! Don't worry, you'll do fine.

So, there you have it. How does your duck look? Feathered friend or fowl? Making your video seem like film may not be that easy, as you have seen. But keep trying, because after all is said and done, you never know what you just might hatch.

Michael Reff is a Senior Photographer for Turner Broadcasting