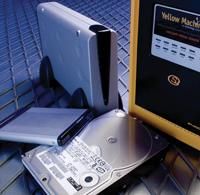 There's no way you can ever really have too much storage. But if you're running low, what's the best way to get more?

As video and audio content producers, we have greater storage needs than practically any other subset of computer users. Between the need to work with the highest-quality versions of your projects' source files and the need to reuse elements between projects, it's easy to plow through a lot of hard drive space in a pretty short amount of time. So what's the answer? Well, in a nutshell: even more storage. Even if you just dump your old projects to hard drives, than take out the drives and keep them on a shelf, you need a way to keep your old stuff around for reference and posterity. Let's take a look at a few ways to pull this off.

Standalone Network Attached Storage (NAS) devices are becoming widely available, and their prices are decreasing. Most are easy to configure, and they allow you to start writing data to them shortly after you establish the network connection and go through a quick setup procedure. The benefit of NAS devices is that they allow you to put your footage on a common device that isn't dependent on having a particular computer in use, allowing you to access that footage from any computer on your network. However, you can get the same effect by setting up a shared folder on an existing computer that you already have. The problem with NAS devices is that they work best over Gigabit Ethernet connections, which are more expensive (both cable-wise and switch-wise) than the usual 10/100 networks that most broadband Internet users are familiar with.

Hard drives are still the most standard way to store video on a computer. They offer some of the lowest costs per gigabyte of any storage media (well, some forms of backup tape provide some low costs per gigabyte–but you have to invest in a very expensive tape drive to use them, therefore negating the cost benefit). They are plenty fast, they can be implemented in many different configurations, and they are readily available.

There are a few factors that differentiate hard drives:

You can also roll your own external hard drive with a readily-available enclosure kit. These kits include screws, cables, a power supply, and a small board that includes a bridge chip that goes between either an ATA or SATA interface and a FireWire or USB 2.0 interface (though there are the occasional enclosures that can do both). All you have to do is to install a hard drive into the enclosure, then plug the whole shebang into the wall and into your computer. The best part is that you get control over the color and design of the external case, and that you also get control over the hard drive that you use.

There are also external units that include multiple drives. Generally, these are set up as a RAID array (more on RAIDs later), but sometimes as a JBOD ("Just a Bunch of Disks," a way of spanning a volume over several hard drives without using any form of RAID) or in the traditional one-volume-per-disk configuration. The eSATA versions generally provide performance on a par with standard, internally mounted SATA drives, since there is no overhead taken up by the aforementioned bridge chip.

Removable disks have tip-toed away somewhat over the past few years, after a period of widespread interest about 10 years ago with the introduction of Iomega's Zip and Jaz drives, along with SyQuest's EZFlyer, SyJet and SparQ. Since then, SyQuest has disappeared, while Iomega is still offering the popular Zip format in 100MB, 250MB and 750MB versions. Iomega replaced the 1GB Jaz format with REV, a format that holds 35GB or 70GB on a hard drive-like disk cartridge, utilizing a glass platter. Grass Valley is now offering a version of REV called REV PRO, which offers some speed advantages over the original Iomega version of REV.

Another approach for removable storage is to use a removable case for your hard drives. You mount a dock in a 5¼" drive bay in your computer case, then you mount a hard drive in the matching tray. Then you can buy more trays and put different drives into them if desired. However, that also means that you have to plan ahead if you want to change drives while the machine is running, since not all disk interfaces support hot-swapping.

To implement a RAID array (well, one that doesn't live outside of your computer's case), you would need a motherboard that includes a chipset that allows the creation of RAID arrays, or you would need a specialized disk controller designed for RAID. Both Windows XP and Mac OS X also allow you to create RAID arrays in software, but any speed advantage that you might get could be negated by the computer's speed or the load on the system.

To Flash… or Not to Flash?

As we discussed last month (Where Your Video Lives, Oct. 2006 Videomaker, p. 39), the growth of USB flash drives and memory cards can't be ignored–but the capacities and speeds of current flash memory products are better suited for easily sharing small files or for working with still images. Unless your projects are particularly small or you need the utmost in portability, flash memory is probably not your best choice for most video applications at the moment. However, as flash memory keeps getting faster and capacities keep getting larger, we will probably reconsider our current position someday for its use with video applications.

We've really just scratched the surface of all of the different storage options available to you. We have two hopes: first, that we've opened your eyes to a few options that you might not have thought of; and second, that you don't lose a single byte of your valuable video projects.

[Sidebar: Other formats to consider]

Don't overlook one very obvious backup medium: Mini DV tape. If you are happy with the way your project turned out and have no intention of making any changes to your final edited project, going out to the originating format is a great solution that only requires your camcorder and a $3 Mini DV tape to pull off. Of course, if you do want to re-capture your footage and make changes later, all you have to do is find your original project file, any other music or plug-ins that you used, and away you go.

Other tape formats, such as Ultrium LTO (Linear Tape Open) and DLT (Digital Linear Tape), also exist. Designed to run backups for corporate environments, the prices are on the steep side, but there are some big advantages. The tapes have a relatively low cost per gigabyte, and DLT in particular has become a standard format for DVD authors who need the most reliable way to send their projects to a duplication house (however, most dupe houses now accept projects burned onto standard DVD-R or DVD+R discs).

If your projects are short, there's no shame in simply burning all of your project files to DVD. It becomes tedious quickly when you get into larger projects, though, or expensive when you cross the 4.7GB barrier over to dual-layer media.

Also, don't forget about the emerging high-capacity optical formats, namely, Blu-ray Disc and HD-DVD. Blu-ray burners are starting to trickle out as we write this from well-known names such as Pioneer, BenQ and Sony. The advantage is that these formats can hold up to 50GB of data on a dual-layer Blu-ray Disc, and up to 30GB on a dual-layer HD-DVD (at press time, however, HD-DVD burners are not yet available). But the problem is that the discs are still pricey. Consider, though, how little time it took for the price of blank DVDs to slide from more than $10 to less than a dollar.