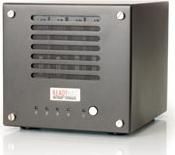 If you've been thinking about getting an external hard drive, but you have more than one computer, you now have another option to consider: a network attached storage device (NAS), a box full of hard drives that can be accessed by any computer on your network. An example of such a device is the Infrant ReadyNAS 600. We tested a version of the device with 1TB of raw capacity (646GB available capacity) on a home network with a Netgear 10/100 cable/DSL router, a Pentium 4 2.6GHz HT desktop machine and a Pentium M 715-based notebook (both running Windows XP Pro SP2), and an Apple Power Mac G4 800MHz running both Mac OS 9.2.2 and Mac OS X 10.3.9.

A bonus feature (that we didn't test) is that it also acts as a print server, so you can place the device next to your USB printer in a central location and everyone on your network can print to your printer.

The ReadyNAS 600 is well-constructed–there's nothing flimsy about it. The unit accommodates up to four hard drives, which can be set up as a stripe, a mirror, or as a full RAID 5 array that uses independent data disks with distributed parity, giving the system redundancy and allowing recovery after one drive dies (this is the configuration we tested). You can also set up one drive to be a hot spare (at the expense of available space), which means that drive stays idle until one of the other drives dies–at that point, the RAID controller would detect the demise of the drive and automatically begin rebuilding the contents of the failed drive onto the now-active spare. You can also adjust journaling settings (which give the array's filesystem a record of written files, making recovery easier in the event of corrupted files or power failure). Infrant recommends that you leave journaling turned on if you don't have the ReadyNAS 600 attached to an uninterruptable power supply. However, if you only use the device to store stock footage and footage that could be re-captured from tape, you could get by without journaling, but if the power failed, the system would need an hour or so to check the filesystem before you could access the device again. Ultimately, if you can afford this, you can probably also afford a small UPS with a USB interface.

We attached the ReadyNAS to our router and plugged in its power cable. It's a little noisy (not bad for most environments, but you definitely wouldn't want it in a working audio studio.) The device is well-ventilated and cool to the touch.

To actually find the device on the network, we installed the included RAIDar utility on our Windows desktop machine, which found the ReadyNAS on our network and opened our Web browser to a setup page. This is where we configured things like network addresses, security levels, types of file sharing, folders to share, access control, passwords and quotas. Other pages within this interface (all accessible through a Web browser) allow you to see the health of the installed disks. Some background knowledge of networking is helpful, but generally speaking, if you can install a DSL/cable router, you'll have no trouble installing the ReadyNAS 600.

Accessing the drive on our Windows XP desktop machine was as easy as it gets–a quick peek into My Network Places revealed the new drive. We also had no problem at all mounting the drive on our Mac, regardless of whether it was booted into Mac OS 9 or Mac OS X.

We dumped some stock footage and music onto the drive. We were treated to a mesmerizing array of blinky lights on the ReadyNAS' front panel as it slurped up the files, indicating that the device's hard drives were each being written to in bursts. We could view some stock footage from Digital Juice's VideoTraxx 3 that we had on the disk with no stutters or lags at all. We found that the maximum sustained data transfer rate we could get was 7.7MB/sec, which is plenty for DV25, HDV and DV50 footage, but may be problematic for higher-bitrate footage.

We were able to successfully capture some video from a Sony DSR-PD170 DVCAM camcorder directly to the ReadyNAS using Ulead VideoStudio 8. Capturing using other editing software (we also tried Sony Vegas and Apple iMovie) was somewhat more problematic, though, resulting in stuttering and dropped frames. Updating the firmware to a beta release provided by Infrant's PR department (which included some Mac OS X-specific optimizations) allowed us to capture a little bit longer with iMovie, but we still got some stuttering.

Paradoxically, when we captured the footage to our Mac's local hard drive and then copied the clips to the ReadyNAS, it was a bit faster than copying the footage from our Mac directly to our Windows XP machine. Once the files were on the device, we had no problems pointing our XP machine's Vegas installation to the clips, doing some quick edits and rendering our completed project. Depending on your capture software, the most reliable way to get your footage onto the device may be to capture to your local hard drive, then moving those files onto the ReadyNAS.

We can think of many uses for the ReadyNAS 600, such as a convenient repository of stock footage (several DVDs worth of footage won't make a dent in the device's capacity, and it also allows you to keep your valuable original media somewhere safe) or a place where you can dump footage (which is especially handy if you edit with multiple computers).

Although the ReadyNAS includes backup software and makes a spiffy backup device, Infrant suggests backing up the device itself from time to time. (However, if you're dealing exclusively with footage from tape or from libraries, this won't be as much of a concern–just make sure that all of your project files are getting backed up onto some other type of media.)

Infrant has leveraged the abundance of cheap hard drives at the perfect time with the ReadyNAS 600. After all, who would've thought that we'd ever see affordable storage in the terabyte range?