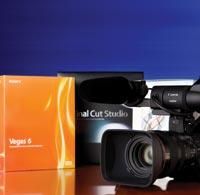 If you're eager to leap into High Definition production, but prefer to limit your six figure purchases to real estate, then HDV is for you. In the same way that Mini DV revolutionized standard definition shooting, the not quite three-year-old HDV format is doing the same for Hi-Def. Affordable HDV is available today, but myriad variations can confound a buyer.

At first glance, you might suspect that the video princes have sidestepped their usual format wars. HDV was created by a partnership of Canon, Sharp, Sony and JVC. Much is in common. HDV records in MPEG-2 on Mini DV cassettes. The aspect ratio is wide screen 16:9, while the output is 1080i (1080 pixels horizontally scanned interlace) or 720p (720 pixels scanned progressively). The tape run time for HDV is the same as for Mini DV, so your 63-minute cassette will last more than an hour. Since the top throughput of HDV tops out at the same data rate of DV tape, video can be readily loaded to an edit system in real time via FireWire.

However, there are differences: HDV1 from JVC records at 19 megabits per second in MPEG-2 with a resolution of 1280×720 pixels (progressive). HDV2 from Sony and Canon records in MPEG-2 at 25 megabits per second with a resolution of 1920×1080 pixels (interlaced). If you shoot JVC's HDV1, you won't be able to transfer through FireWire from a Sony HDV2 deck or camcorder. Sony's HDV doesn't play back on JVC either. Canon adds to the compatibility issues with an "F" setting on its camcorders that won't play back on either a JVC or Sony deck. In practical terms, this means that you'll either be digitizing directly from your camcorder or committing to HDV1 or HDV2 for your complete production and post chain.

Professional HDV camcorders are now available from Canon, JVC and Sony. Let's break down what they share and how they differ, beginning with three 1/3" CCDs. These are much smaller than 2/3" professional Betacam or HDCAM camcorders. 2/3" HDV is coming but for now the smaller chips in all these cameras present a challenge.

The shorter focal lengths of HDV give greater depth of field, which helps ease the critical focus issues with shooting in High-Def. It's an asset for run and gun ENG style shooting. However, some videographers are going to be using HDV for digital cinematography. Since much of the "film look" is due to a shallow depth of field, you'll need to pick up a set of neutral density filters to cut down on light, thus opening your iris to better isolate your subject against soft focused backgrounds. This is where a matte box proves handy, giving you a choice of options like gradients to take down the exposure of the sky. Another way to emulate film is to use a prime lens, which is usually sharper than a zoom. For this, you'll need a camera that offers interchangeable lenses (Canon and JVC at present).

There is less tolerance for bad focus, because the HD image is noticeably sharper. All the top end, HDV cameras offer both electronic viewfinders and external LCDs, but they go further, offering peaking enhancement in black and white viewfinder mode so that in-focus elements are tinged with color. Sony allows a camera operator to temporarily double the center of the image for a focus check.

HD cameras allow you to monitor with standard definition field monitors. However, for critical applications such as an ultimate transfer to film, get a portable HD monitor. Very good LCD options are available.

Shoulder mounted cameras are easier to handle during extensive handheld shooting. When possible, get a camcorder with XLR inputs for your mics. Most HDV camcorders will allow the user to shoot in NTSC DV as well as HDV. Sony's HVR-Z1U also plays back in DVCAM, 1080 50i and PAL. The Canon can record to PAL with an optional upgrade.

The Hornet's Nest of 24P

"Film look" is a combination of lighting, low depth of field, wide exposure latitude, camera moves defined by prime lenses, and finally 24 progressive frames. Sony uses a CineFrame Mode that replicates the look of film with a 3:2 conversion of internal 1080i that works by throwing away a field of data. Canon has a simulated progressive capture mode that's designated "F." It works by interlaced scanning twice in the time of a normal field. Compared to true progressive, this process does create some artifacts. JVC's HDV1 actually uses genuine 720p 24-fps recording, making it the far better camera to use if film is the ultimate destination for your show. You can export directly to a film style edit system without converting the frame rate.

DV and HDV compress images very differently. In DV, like HDCAM and Digital Betacam, the video-compression is purely intraframe, comparing and compressing within each individual image. It's the same kind of compression most photos used on the Internet (e.g., JPEG). Each frame is compressed independently. Since HDV is MPEG-2, it uses both intraframe and interframe compression. Interframe compression happens in what is called a GOP or group of pictures, made up of I, B and P frames. The I frame is encoded independently. The next frame to be encoded is a P or predictive frame, which anticipates changes in the video, discarding redundant information. Between the I and P frames, B or bi-directional frames fill in, looking both backwards and forwards. It's played back IBBPBBP etc., with the next I frame determined by the size of your GOP. Since most video has redundancy across frames, the method works well until there is a lot of change. While shooting HDV, be wary of rapid camera motion like fast pans, which can overwhelm the compression process.

Sony also recommends using its better quality HDV vs. DV tape. If you're unlucky enough to have a drop out on a recorded I frame, you have no back up immediately fore and aft. The glitch will affect everything in your GOP.

Editing HDV footage is more problematic than cutting DV. Since each DV frame is compressed independently, the footage can be cut at any frame without affecting those next to it. In HDV, the I frame, the only truly intact frame, is typically recorded once every half second or less. The rest are extrapolated across the GOP. Any transition while editing, even a simple cut, requires an entire decompression and then recompression of every frame in the GOP.

Non-linear HDV editing demands a lot of processing power to extract and then reconstruct an image at a transition. MPEG hardware encoding is usually cleaner and faster than software only, so consider investing in a dedicated HDV encoding board. Some will also give you real time playback on a monitor. No matter what edit system you choose, you'd be wise to get the most RAM and the fastest CPUs you can afford. The good news is that the file sizes will be as manageable as working in DV, so you don't have to buy the gig a minute of storage that uncompressed standard definition editing requires.

Compression issues are exacerbated if you are shooting in simulated 24p. If you've ever cut film that was telecined, you've seen the field complications that arise from a 3/2 pull down. Both Sony and Canon's HDV cameras do a reverse 2/3 which requires even more sophisticated processing with MPEG-2 during editing. These HDV modes can produce unintended motion artifacts. Some videographers planning to finish on film have opted for shooting in PAL mode at 25 fps. They find the 4% speed difference less objectionable than the processing errors caused by pseudo 24p.

Choose your HDV package based on your specific shooting needs. Each one has its tradeoffs.

Paul M. J. Suchecki writes for Network TV and shoots and produces documentaries. His latest documentary is the feature "Can We Reverse Aging?"

[Sidebar: The Natives and the Non-Natives]
Different editing programs handle the long GOP MPEG-2 file format of HDV in different ways. The two main workflows today (and hopefully still in place by the time this magazine is printed and in your hands) consist of native HDV editing and non-native.

Native brings the long GOP I, B and P frames into the editing program unchanged. At this point, to cut in between most frames, a conversion process would have to take place. Some time after the cut and before output to tape, the GOP would have to be reconstructed (rendered). Though there is slight degradation of the image, proponents of native editing believe this to be the cleanest, not to mention quickest way to edit HDV footage. Only those GOPs that are altered need to be reconstructed at output.

Non-native HDV editing usually involves the use of an intermediary. The long GOP must be converted, or transcoded, into a group of I frames. Though a time consuming render is necessary when capturing footage and putting back out to tape, there is no interruption to the editing work flow during cutting, as all the frames are now all I frames, just as if it was DV footage. Some of the drawbacks here include the need for more hard drive space as the conversion from long GOP could take up to four times the space, generation loss on conversion and longer render time when capturing and outputting.

Of course, both camps claim their process produces both a better workflow and a better overall image.

[Sidebar: HDV Glossary]
16:9 Aspect Ratio: is the ratio of the width to height of an image.

Depth of Field: is the front to back area of apparent focus in a shot. It is affected by focal length of the lens, iris size and camera to subject distance.

Intraframe Compression: A technique that compresses the video by removing redundancy from individual video images.

Interframe Compression: A technique that achieves compression of a video file by eliminating redundant data between successive compressed frames. In a shot sequence of a red balloon sailing across a blue sky, for example, most of the image stays the same and is redundant from frame to frame.

MPEG-2: refers to an interframe and intraframe compression scheme instituted by the Motion Picture Experts Group. It differs from other MPEG compressions in that it is used to encode audio and video for broadcast signals. MPEG-2 compression is used in numerous applications, notably DVD, HDV and satellite transmission.

Interlace Scanning(i): Picture a Venetian blind representing scan lines. The odd lines, like the slats of a blind, are all scanned in one field. The even are scanned next. Put together they make up one complete frame of video.

Progressive Scanning (p): This is a scanning method where the lines are scanned in numerical sequence from top to bottom. This action in video more closely simulates how film records information.

Megabits per second (Mbps): a number representing the amount of digital data moved through a single point within a second of time.