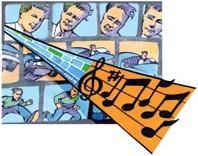 Using segues and bumper music will give your productions a professional touch.

It's the universal challenge: getting from point "A" to point "B." On the road, we use a map. In video production, visual transitions are the eye candy that gets the job done. But what about the sound? Enter the segue — a musical element that bridges the gap between visual segments. Segue music is great between scenes, during on-screen text, and to help guide the viewer to the next logical step in an informational video. The good news is there are many ways to craft these musical tools. Let's see how it all works.

The easiest way to get segue material is to buy it pre-made. Buy-out music libraries are a perfect place to start in your quest for audio transitions. Most selections come in full-length, :60, :30 and even :15 or :10 durations, along with short burps sometimes called "stingers". If the short versions suit your taste, just drop them on the timeline in the appropriate places and you're done. Unfortunately, you'll probably need different lengths for your project, so a pass through your favorite audio editor is in order. Editing music is something of an art, but generally involves identifying beginnings and ends of musical phrases, then combining those elements into a new edit of the song. Hopefully, this new version better suits your project's needs. Products like SmartSound are perfect for this task as they let you input the exact length you need, then create alternate versions of the segue track.

For a quick lesson in audio editing, rip one of your favorite songs and drop it into an audio-editing program like Adobe Audition or Sound Forge. Begin by finding the starting points of all the verses and choruses, setting a marker or cue point exactly on each downbeat. You can zoom in to find these points, which usually include an audio spike from a bass drum or other prominent instrument. After you've found the verses and choruses, look for instrumental sections without lyrics, and mark them too. Depending on the composition, these segments could be turned into loops for later use. Using your markers, experiment with the elements, moving sections around, copying, pasting and creating new edits of the tune. Under some circumstances, you may be able to use these edits in your productions. Remember, though, as a general rule, you can't include commercial music in your productions for copyright reasons. (Tip: also keep a good log of all music used, including the artist, song title and track for reference later if you need to declare the music use.)

If the pre-recorded options leave you cold and the thought of all that editing sounds too complicated, consider making your own bumper music or segues. Using loop-based production tools like Apple Soundtrack, Fruity-Loops or Sony's Acid, you can quickly and easily create unique, personal compositions with your own flavor. In addition, you may even rest easier at night knowing you've built royalty-free one-of-a-kind music. Finally, loop-based production is fun! So what are you waiting for?

After choosing your software tool, you'll need some basic loops. Most packages come with a starter set of basic building blocks and you can add to the collection, either by purchasing additional loop libraries or finding freebies on the Internet.

Loops are simple, repeating phrases of music that usually feature one particular instrument. More complex loops contain multiple instruments or even an entire musical arrangement. The key is that they all repeat seamlessly — or loop.

If you've never used this type of production software before, think of it as a band of skilled musicians, each with their own track or channel in the program. You decide which musicians to include in the piece and what parts they'll play. You also determine how long they'll play and at what volume. You do this by selecting loops from a list, then assigning them to individual tracks. Next, you'll "paint" or "draw" the loops into the composition at whatever length seems right. Add more instruments until you have a full sound that suits your ear. Loop-based production also makes it easy to do your own remixes by removing certain parts or changing instruments for alternative versions. This adds variety without compromising the musical theme of your creation. In short, just play with it until it sounds right.

When you've finished building your composition, a mixing pass is in order. Here, you decide the best overall volume for each part — along with any additional volume tweaks in specific areas. You can pan the sound from left to right (even surround panning in some programs) and apply effects such as reverb and echo if you like. Remember, this mix is going in your video production, so remember how it fits in the overall project. If the music will have narration over it, make sure the piece doesn't overpower the narrator. Also, keep the context in mind. It's a rare video project that switches from Jazz to Reggae, then Country or Hip-Hop.

Your segues should reflect the overall mood of the video project and compliment it at every turn, not stand out as features. Musical segues are good for changing the mood from one segment to another. When conflict builds in your story, a slow fade to black with a musical change before the next scene is very dramatic.

Virtually every media project needs a segue from time to time. Whether it's a training video, promotional project or even a feature-length movie. Using these techniques will give you several creative options and you might even have some fun at the same time. And don't underestimate the power of a segue to keep your production moving.

The music side of video production has several terms for
the various types you may use.