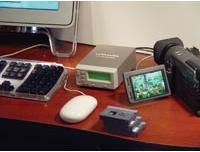 It’s about Time… The "tapeless" production future everyone has been dreaming about might be closer than you think.

Direct-to-edit tapeless systems record digital video data directly to a portable hard drive — bypassing the need for videotape. The big benefit is no logging and capturing from tape — you simply "drag and drop" your finished video clips right to your desktop and you are ready to edit.

Some of the biggest video companies in the world, Sony, Panasonic, JVC, etc. have developed various direct-to-drive or even direct-to-chip cameras — all looking toward a tapeless future. Why the rush to leave tape behind? Time. And, as the pundits have long noted, time is money.

A typical log and capture operation can more than double the amount of time you spend in processing your field footage and preparing it for digital editing. That’s because you have to load the field tapes, go through and log them (even if you can use fast shuttle between the takes,) and mark your in and out points. Then you must run the tapes again in order to capture the content to the hard drive in real time. Even if you walk away to get a snack while your computer is batch capturing, you’re still using time… time on your computer… time on your camcorder… time on your work flow. Direct- to-edit completely eliminates this by letting you take the field clips and "data copy" them right to your drive — and then directly into your timeline — in a fraction of the time.

In the Nick of Time

The process itself is reasonably straightforward with most of the digital capture units working just like an outboard videotape recorder. One nice bonus is that most of them also allow you to "trigger" capture with your camcorder start/stop button. So you get digital versions of the same clips that would be on the digital tape — not one long continuous recording.

Most units also allow you to set the capture format to match your editing software’s native format. That means there’s some basic menu setting before you begin shooting that determines whether the clips will be written as PC type .avi files, Mac-friendly QuickTime .mov files or other common formats. Properly set up, you can drag and drop your clips directly onto your timeline with no transcoding or rendering time used at all.

The truth of the matter is that if your video projects are few and far between, then you’ll probably lose any time saving benefits. Even the most affordable direct-to-edit systems cost as much as a solid entry-level camcorder, and some of the larger units can cost as much as a full-featured prosumer camcorder.

So how do you decide if the cost is worth it? If your life is a never-ending process of log-capture-repeat, these solutions won’t just trim your capturing time; they’ll virtually wipe it out. And if time is money to you, direct-to-edit will likely pay for itself in a hurry. But whether or not direct-to-edit is viable for your workflow right now, you can feel pretty sure that these products (and other similar systems currently offered or on the horizon), spotlight a big change coming in location video recording. The dream we have all had of moving to tapeless production process looks like it’s finally coming true — and with plenty of options.

The Times they are a-Changin’

At last year’s NAB show, Panasonic debuted its P2 camera system that uses arrays of secure digital memory cards to record video not to a hard drive – but to solid-state digital memory (no moving parts). This technology evolution promises not only "direct to clip" efficiency, but also the end to all the motors, belts, pulleys and other mechanical paraphernalia that goes with moving tape across spinning recording heads in today’s camcorders. And that will almost surely increase reliability and have a huge positive impact on service and maintenance issues.

Yep, the times are changing, and fast. Something I was reminded about when I recently went shopping with my son. He wanted music from a band not on iTunes, so I took him to the local mall in search of Music CDs. When we got home, I watched him struggle to dig through all the plastic packaging, the security box, the plastic wrap, the jewel case — then finally import the contents of the disc to his laptop and iPod. Then I watched him throw away the whole plastic mess, including the CD!

His comment: "What’s the point of all this stupid plastic?"

I glanced at my rack of plastic boxes filled with plastic DV tapes and wondered if he wasn’t on to something. For right now, I like the security of knowing my footage is backed up on tape even if I also capture direct-to-edit. But I can clearly see a future where sending plastic tape shuffling through a camera will seem as "old school" as playing music by spinning 45-rpm vinyl records is today.

One of the earliest pro direct-to-edit units was the Sony DSR-DU1 — a slickly designed hard drive for Sony pro cameras.

The design and most of the implementation was superb. But there was a flaw. Sony used a proprietary codec in their implementation of DV recording so that instead of being able to "drag and drop" the files directly into the timeline, non-Sony software users had to render every clip! Today, the typical direct-to-edit unit allows the user to set file compression (.avi, .mov, uncompressed, etc.) prior to shooting to maintain drag and drop compatibility with modern video editing applications.