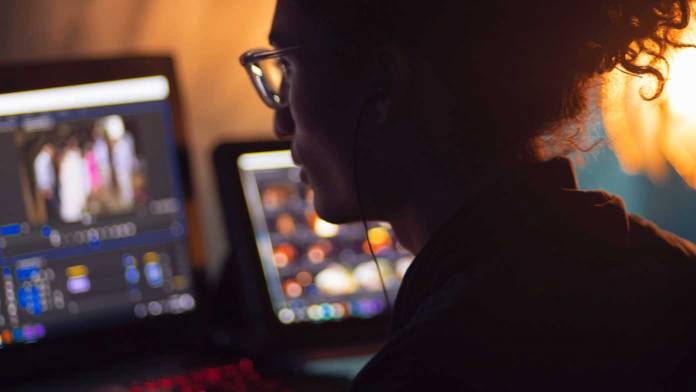 Post-production is supposed to fulfill the promise of pre production (the script) and production (the shoot). Editing, they tell you, pulls everything together and delivers the program envisioned by the producer, director, and sponsor.

As usual, reality falls short of theory, because editors almost never get exactly the raw material they expected, and they don’t always shape it as well as they might. In two previous issues, we’ve talked about planning the shoot and then shooting the plan. Let’s wrap it up here by seeing how to carry planning forward into post-production.

In a nutshell, you work as hard as you can to complete the original vision, and, where that’s impossible, to make the best program you can with what you’ve got. To do this, you need to systematically evaluate and deal with your raw material and then systematically mold it throughout post-production. In both cases, “systematically” implies that you’re doing some planning of your own.

In the best production setups, the editor is in on the shoot, evaluating each day’s footage and providing feedback to the director to ensure that he can edit the show to the original plan. Too often, however, the editor joins the process after shooting wraps and is presented with a done deal: here’s the stuff, now build a program. This is the real-world situation we’ll talk about here.

First off, a good editor is not an auteur (a director who is believed to be the major creative force): Your job is not to express your own vision, but to carry out the vision of the writer, director, producer, or whoever it is that presides over the production. With that in mind, you should take your very first step even before you start screening footage: you should discover (or recollect) what the original plan was — what the program was supposed to be. Typically, that means reviewing the concept with the producers or, at the very least, closely re-reading the script. Only when you have the original concept freshly in mind can you start dealing with the footage.

The obvious next step is to review all the raw material, constantly comparing it to the program concept. First and foremost, did they shoot all the material needed? (You’d be surprised how often they didn’t.) Does the footage they did shoot do its job: are the establishing shots and closeups and inserts taken of the right stuff from the right setups? Is the technical quality uniformly up to par?

And don’t forget the audio. Is the production sound good quality (or even usable)? Did they record background tracks, ambient sound, and wild sound? Have they planned the music to use and how to use it, or are they leaving that to you?

After a thorough review of the raw material (and a yellow pad bristling with notes) you’re ready to plan your post production strategy. First of all, what absolutely has to be shot (if overlooked) or re-shot (if loused up)? For example, your documentary on glass blowing covers the whole process of making a vase, from molten glass to finished…. Whoops! The beauty shot of the completed work is badly lit and out of focus. Try as you might, you can’t think of a way to drop the poor shot and edit around it because it’s the whole point of the program. So it has to be re-shot.

And as long as they have to send a crew back out, what other shots can you improve? What missing angles could be picked up? (Which is why they’re called “pickup shots.”)

Sooner or later, you’ll run up against a wall: you can’t get more coverage of the master glass blower because she promptly retired and left for Maui. Now your strategy shifts to developing Plan B. Studying the footage you discover two things:

Gotcha! Plan B is to support shots of the blocked furnace door with narration explaining what she’s doing (even though she was doing something else) and shoot the missing inserts with the assistant’s hands and arms subbing for the Master’s. In summary, then, you evaluate your raw materials, reshoot where it’s feasible, and plan workarounds where it’s not.

With plans A and B implemented, you do your best to create the finished program as originally envisioned.

With your post production strategy worked out, you’re ready to turn the raw footage into a work of genius. Here too, you need a systematic plan, though admittedly, the plan is much the same for most editing jobs.

The problem with digital post is that it encourages you to do everything at once: find the shots, assemble the sequence, trim to length, build the tracks, add CGs and graphics, repeat with the next sequence, and so-on. Completing one sequence at a time, you’re more likely to end up with a bunch of individually fine pieces that refuse to fit smoothly together. Instead, it’s generally (though not always) better to work vertically instead of horizontally: go through the entire show, doing one job — building just one layer — at a time. Here’s how it works:

First, break out and catalog all your footage at once. Why? I can’t tell you how many times I’ve plugged a hole in one sequence by remembering a shot I could steal from a different one. You need a mental inventory of all your footage before you start.

Then begin assembling your show, sequence-by-sequence, to be sure, but without worrying about fine-tuning. Once you’ve previewed the result, you’ll have a good feel for the way the program’s coming together.

Now do your tuning, trimming shot lengths, adjusting cut points, pulling whole shots that turn out to be superfluous. By working the whole program at once, you keep a feel for its rhythm and pace.

So far, you’ve had just the production track, if any. Now it’s time to pull things together with audio, layering ambient and background tracks, adding sound effects, timing narration, selecting and adding music.

Finally, you’re ready to begin adding CGs and graphics: transitions, titles, and the like. Again, seeing the show as a whole will help you keep them consistent.

And don’t forget the DVD (which will almost certainly be your release format). As you polish the show, start looking for the material to repeat as backgrounds for your disc’s main and sub menus.

So, do your strategic post production planning by evaluating your materials and deciding exactly what you want to do with them; then do your tactical planning by working through the editing process one careful layer at a time.

As you work, you’ll be vulnerable to three terrible temptations. If you give in to them, you risk distorting, degrading, or even ruining the original program plan.

First, never blow off problems. “I’ll stick in a dissolve.” “I’ll run it in slo-mo.” “I’ll cover it with voice-over,” or just plain, “Ah’ll think about that t’morra.” When you encounter a problem, deal with it, solve it, do it now! If you don’t, these little difficulties tend to accumulate until they overwhelm you.

Second, don’t talk yourself into inadequate fixes. “That’s good enough.” “Oh, nobody will really notice.” “Those shots cut together well enough.” No, no, and no. You’re always under deadline pressure and it would really, really help if you could get away with things; but when you screen the finished product, they’ll jump up and wave at you every one of them.

Finally, don’t make every sequence perfect in and of itself. Always recall what it’s supposed to do and how it’s supposed to fit in the program as a whole. Sure, you got such amazing footage out of that car chase that you just have to use it all; but makes the sequence way too long and too important in the story as a whole. So don’t get hung up cutting each gem, without regard to the whole necklace.