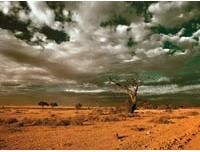 “I fired the set designer!” bellowed Yuri, barging into the editing room in a gleeful

"You fired Manfred?!" I squeaked. Manfred was the best science fiction set

designer in town who would still work for pizza.

"Yeah!" shouted Yuri, waving his gigantic meaty fists in the air, "and I

fired that idiotic special effects team too! Bunch of losers!"

Zombie Revenge (or is it Zombie Alien Revenge? I keep forgetting), was one of those

the director, and he was signing the checks, so I figured that was his business. Though

it left me with a lot of questions.

"How are we going to shoot the scenes on the alien planet, Frabjuous-5, where

the Brainclaw Warriors live?" I asked.

"I've already shot it!" beamed Yuri confidently. He handed me the tapes. I

stuck one in the editing deck.

"Yuri, this is the playground outside of the middle school, it's just not an

"Hey!" barked Yuri, pointing a thick, wet finger at me. "You're the whiz-kid

editor. Make me an alien planet. I'm not in a talking mood tonight. I'm in a firing

mood." He slammed the door.

Video is no more than a string of digital still images. Just as you might manipulate a

graphic image in a program such as PhotoShop, you can manipulate video in your editor

Almost every editor comes with built-in filters. Typically found under

"effects" or "tools", they apply changes to blocks of selected video frames. There are

visual effects. The first type allows you to tweak things such as brightness, contrast,

surface of a pond or even twirling the image around on the screen. You can also create

filters can be applied to a single clip; you may, for example, brighten and sharpen a

clip. I figured filters might save this editing job.

Making an Alien Landscape with Hue and Stop Motion Filters
The Hue of an image is the color map it's using. Changing the hue of a clip replaces the

original colors by shifting the color wheel in one direction or another. I figured

in my timeline, went to the filter menu, and added a Hue filter. The preview window let

me see what the filter would do. When I was happy that the colors looked sufficiently

other-worldly, I applied it.

homeworld, I also added a Stop Motion Blur filter. This is a visual effects filter that

fades multiple copies of the clip over itself with a bit of a shift in time. The result

is a slow-moving, weird-looking image. It's frequently used for POV shots of people who

are drunk, sick, or taking dangerous drugs. I figured aliens would look like that on

their blue-grassed home planet, and it would disguise the fact that the nearest building

was a jungle gym. I applied that filter. When I played the clip back with both filters,

it looked very other-worldly. Pleased with myself, I turned off the lights. And went

The next morning I was waiting around for praise like an anxious puppy. Yuri, chewing

on a slice of pizza that looked like a wet napkin, watched the alien footage and didn't

do more than grunt. He gave me some new tapes and left. Yuri had plenty of bad habits.

Firing people on a whim was hardly the worst. Another of Yuri's faults was that he never

Not all light is created equal. Light has varying "temperatures" which affect

its color, ranging from "cold" (bluish) to "hot" (reddish). Mercury vapor and quartz

lights have a "cool" look and incandescent bulbs have a "warm" tone. The color white

looks different under each of these light sources. So if your video footage involves

several different light sources, your cast's costumes will change color as they walk

from room to room. How much will they change color? Not so much that nobody will

recognize that they're the same clothes, but enough so that you'll never win an Oscar

and when you're sitting in the alley crying about that, other videographers will walk

past laughing and pointing. You'll hear them say " … never sets his white balance!

Hahaha!" as their limos whisk them away to trendy parties. You can check your own

both sources at once.

Well, Yuri hadn't set his white balance, and he didn't have a limo, but he

did have me. I selected the offending clips, and readjusted them with the color balance

"The aliens are going back in time!" bellowed Yuri, pointing a copy of the script at

me in an accusatory manner. He was wearing one of those orange hats with ear flaps that

"Period sets? Vintage cars?!" Suddenly this turkey was getting exciting.

"Are you looking for a job, Cassidy? Because you should be. We don't have the

money for period sets or vintage cars. I'm going to do the whole thing in closeup, but

in black and white! So you know it's old!" He thought that was a pretty great idea.

software filters in our editing program. By selecting a clip and adding a desaturation

filter, a color clip can be rendered black and white. This pleased Yuri so much, he sent

the aliens back in time again, to 1863, because they suddenly wanted to meet Abraham

Lincoln. This time we used two filters, one to remove all the color, and another to add

red, which gives a sepia toned result. (Some programs have a separate sepia filter

Yuri was so excited with the results, he asked me to show him what some of

the other filters in our editing software can do.

Brightness and contrast are useful, especially in conjunction with Gamma correction,

to lighten or darken a shot. Typically I use it to punch up detail in an underexposed

The sharpen filter doesn't really sharpen your clip, it only makes it seem sharper.

It does this by increasing the contrast between pixels. It won't save a chronically out

of focus clip, but it can do a lot to enhance a slightly out of focus shot.

Blurring a clip is just like sharpening it, only in reverse. Why on earth would you

want to blur something? Well, how about blurring your title card, then fading from the

blurred one to a sharp one. That's why Yuri hires me. The Big Ideas.

Some editors (Final Cut Pro, for example) also ship with a filter which will add the

window dub.) I find this very useful for two things: first, when people are viewing the

rough edit and want to comment, they can be very precise, and second, it obviously

identifies the cut as rough.

Yuri forgot to pick me up for the premiere, so I missed the red carpet, the

paparazzi, and a supermodel who showed up with one of the actors and then got in a big

fight. I made it in time to see the video filters do their magic on the big screen. I

was the only person who could tell that one clip had been a little fuzzy to begin with,

or that at one point in time the color balance was way off between some of the shots,

and it gave me a nice feeling. With all the money we saved after firing the special

effects team and set designers, Yuri gave me a big bonus and told me he'd be sure to

before the reviews start to come in.

Kyle Cassidy is a network engineer and a video artist.