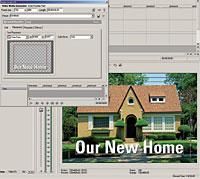 Q: I just finished my first video project and noticed something really weird. I created my titles and they looked fine on the computer, but they went off the edge of the screen on my television. Is it just my TV or what?

A: Congratulations on your project and welcome to the club. The problem you describe is a very common beginner’s mistake: televisions mask the edges of the screen (more so on the sides than on the top and bottom) while your editing software shows the whole frame. This is one reason you should always preview your video on a television before the grand premiere presentation. The solution, as I’m sure you figured out already, is to reposition the title or make it smaller. The next time you are using your software, check the Help file and see if it has a "Title Safe Area" option you can turn on. This will help you line up your text so this doesn’t happen in the future.

Q: I’ve noticed that a few DV software applications (such as NewTek) claim to offer "uncompressed editing" and wonder how this differs from editing in native DV format. As I understand it, editing in native DV is uncompressed except for the 4:1:1 compression that’s already taken place in the camcorder during the shooting process. And since previously shot footage is already compressed, how can any editing application accurately make a claim to "uncompressed editing"?

A: All digital video is encoded and there is always some quality loss when converting reality into zeros and ones. Obviously, those bits take up digital storage space, on tape, disc, memory card or hard disk. Since storage space is finite, some kind of compression is often desirable. It’s easy to forget how important this is with today’s monster computers, but when the DV format was developed, a 13GB Seagate Barracuda 10,000 rpm hard disk ran about $800. A related problem is the bandwidth of the data stream, and at 25Mbps, an hour of DV video might fit on that 13GB drive, but you wouldn’t have any room to edit it. When the data rate of the video exceeds how fast a hard disk can write data, frames are dropped. This is why we recommend a 7,200rpm drive for DV video. As a comparison, uncompressed video with the same resolution as DV has a data rate of 270Mbps. ITU-R 601 is a universal digital broadcast video standard that is considered to be uncompressed, with a data rate of 160Mbps, which is still significantly higher that 25Mbps DV.

The DV format uses a discrete cosine transformation-based (DCT) algorithm employing YUV 4:1:1 luminance sampling. There are two parts to this: a 5:1 DCT compression, which is not unlike the image compression used for JPEG images on the Web, and luminance sampling. This is where the 4:1:1 ratio comes in and it simply means that for every four samples, only one sample has the full chrominance information, but all four have the luminance information. If every sample had the full chroma information, it would have a 4:4:4 ratio. Of course, it is still digitally encoded, and thus compressed to some extent, probably using a DCT process. As another point of comparison, DVD MPEG-2 uses a 4:2:2 luminance sampling ratio, but the video is typically more highly compressed than DV video and is thus a bit lower in quality.

When software vendors talk about uncompressed editing, they may mean a couple of things. First, they may be talking about capturing and editing professional, uncompressed video, with 4:2:2 or 4:4:4 sampling. This would only be possible if you had the hardware to match, meaning a camera that shoots uncompressed and a capture board that accepts uncompressed video (via an SDI link). Second, and this is more common, the software may do all of its processing in the realm of uncompressed video. This means that your 4:1:1 DV video will be upsampled to 4:4:4, processed at that level and then downsampled back to 4:1:1 during the render. This will not improve the inherent quality of your original video, but it does improve the quality of the processing, whether it is color correction, a transition or a wacky effect.