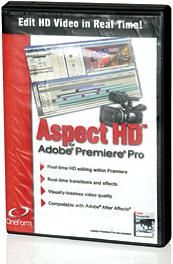 Consumer HD arrived with the JVC GR-HD1 camcorder over a year ago. While this was a fine camcorder for shooting home movies for your HD television, the included edit software was, to put it politely, inadequate. Now, there are bunches of options for editing the HDV format video that the camera shoots, from Apple to Ulead. The CineForm Aspect HD plug-in for Premiere Pro consists of a capture/export utility and a codec to allow you to edit HD video from an HDV camcorder in real time
in Premiere.

The type of HD editing we are talking about here is the HDV format that is shot by the JVC HDV camcorders. The HDV format is catching on and a number of manufacturers have announced that they will be manufacturing HDV camcorders sometime soon. In essence, it is a higher-resolution MPEG-2 format that uses Mini DV tape media for storage and FireWire for transmission to a computer for editing.

The CineForm Aspect HD plugin includes a no-frills capture and conversion application (HDLink) that will get video to and from your HDV camcorder. You can manually capture video by clicking the record button or you can capture the entire tape using scene detection to break the video into separate files. The software does not have a batch capture feature, which is a very serious omission that some editors will not be able to live without. The capture process is not quite as simple as transferring the video data to your computer, however.

The most obvious way to edit HDV footage is to take the high bitrate MPEG-2 video and edit it in its native format. Because MPEG-2 is highly compressed, you need a lot of computer processing muscle to edit it. MPEG-2 editing is not very fun, and high-resolution, high-bitrate HDV video is even less so. CineForm’s solution is to convert the raw HDV footage (MPEG-TS HD) with its Aspect HDV codec to a less computationally-intensive format. Once done, it is a simple matter for your video software to access this codec to edit the video, just like any other video on your computer. You can also convert raw HDV MPEG-TS video already on your hard disk as well.

The conversion process takes time, about 150% of real time on a P4 3.0 GHz system. Even though CineForm assures us that the conversion is "visually lossless," we are still wary of transcoding in all forms. You have three quality choices (low, medium and high) that ultimately determine the size of the output file (185%, 226% and 302% larger than the raw MPEG-TS HDV video). We are very happy to report that the quality of the medium and high video is basically indistinguishable from the original. A minute of high-quality Aspect HD video occupies about 430 MB of hard disk space, which is about twice as much space as a minute of DV video needs.

The conversion process is worthwhile: Premiere was very responsive and played very nicely with the Aspect HD footage. For real-time performance, you’ll need to use the CineForm-supplied transitions, effects and transformations (e.g. scale and rotation). The included effects include the usual suspects you’ll find in almost all-editing software. Real-time performance requires a pretty muscular machine, so make sure you check out the System Requirements and the recommendations on CineForm’s Web site.

You can use your favorite Adobe tools, but you need to render every single edit that isn’t a cut. We ran into another limitation when we tried to mix in footage from other sources. Once again, as soon as we threw in some graphics, titles or even standard DV footage, the Aspect HD plugin needed to render everything.

When your movie is finished, you’ll need to wait for another render. If we were editing DV footage, our timeline would be ready to send straight out through the FireWire jack to our camcorder. For HDV movies using the Aspect HD codec, you’ll need to use the Export > Movie command to render the entire project. This is more of a minor inconvenience than anything else is and we were very pleased with the process.

The output format is the same MPEG-TS HD format that the camera shoots. Then you’ll open the HDLink software and export that file back to your HDV camcorder via FireWire. There are a couple of reasons why you’ll want to output back to your HDV camcorder (or to a JVC DVHS deck). The primary reason is to archive your movie. Another reason is that you can then watch your movie on your HD television.

You can, of course, output the movie to any other distribution format you want, such as DVD. Another very exciting, cutting edge option is to export your movie to the Windows Media 9 (or higher) HD format. Most of us don’t really want to watch movies on our computers, but as computers invade the living room and as DVD players offer more features (such as DivX playback), WMV HD video distribution becomes a definite distribution possibility.

The Aspect HD editing method is a quantum leap over the basically unusable raw MPEG-TS HD editing that was originally shipped with the first JVC HD camera. You can download and try a fully-functional 15-day trial version. A non-realtime variation of the plugin is available for Vegas or any other Windows editing software.

Perhaps our greatest compliment is that the plugin makes editing HDV video feel just like editing any other sort of video that lands in your timeline.


The CineForm Aspect HD plug-in will have you editing HDV video without a second thought.