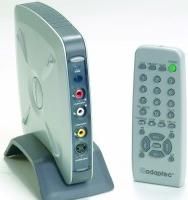 As the desktop computer market branches out and diversifies, the borders sometimes blur between video editing products and digital video recording (DVR) devices, such as TiVo. Adaptec’s VideOh! Media Center is an external video capture device that provides DVR functions along with basic DVD creation capabilities. The idea behind the VideOh! is to bundle a low-cost external video capture device with some basic DVD-creation and DVR software. Since you just plug it into your computer and don’t need to crack the case or install anything, ease of use is its primary selling point.

The VideOh! DVD Media Center is an external USB 2.0 device and installation was very simple and straightforward. Our Windows XP test system recognized the hardware immediately. We spent the majority of our ten-minute setup time installing the bundled software, which was easy enough. Then, after plugging in a cable television source, we were ready to test the unit.
You control the VideOh! via two software packages: Sonic’s award-winning MyDVD for DVD creation and InterVideo’s WinDVR application for video recording. A small remote control talks to the infrared receiver on the Media Center’s hardware to control the bundled WinDVR application. The compact and simple remote control was great, especially when compared to the giant universal remotes you find today that have large numbers of unnecessary buttons crammed into the smallest possible space.

It seems as though Adaptec assumes you already know what a DVR is and how it should operate, since the documentation provides little more than one diagram on the use of the WinDVR application. There’s also a frustrating suggestion to click the Help button on the software’s control panel. If Adaptec wants to provide a product that’s geared toward simplicity, then the company should think about coming up with a clear, concise instruction manual for those WinDVR users who may have never recorded (or edited) video on a computer before.

In short, the VideOh! box and the WinDVR software constantly record video to your computer’s hard drive. When you watch TV, you can always be watching recorded television, even if it was only five minutes ago. This means you can pause live television and get up to grab a Snapple, then hit play when you return and continue watching. DVRs also work a lot like your old VCR, recording programs when you aren’t home so you can watch them later. Finally, DVRs have some sort of graphical program guide, so instead of turning to channel 114, you can just select the program you want from a list. This also makes programming recording of a show next week much easier. No more blinking LEDs on the front of your VCR.

TV on Your PC

The biggest drawback to the VideOh! as a television appliance is that it has no video output, so it’s hard to imagine a serious living room use for this product. Sure, you could plug your computer directly into a DV/I-equipped television monitor, but let’s face it: if you can afford that kind of television, you’ll probably be looking for something more sophisticated than this for your DVR capabilities. So as a television DVR, it is only useful if you think that watching television on your computer is a good idea. With this kind of approach in mind, the Media Center performs well, and provides just enough quality and functionality to keep users happy.

For Videomaker readers, the VideOh! might be seen primarily as an external analog video capture device. The quality of the video that the unit plays on the computer monitor is very good. The device converts your analog video (via RCA or S-video) into MPEG-2, which is the standard for DVD video discs. MPEG-2 is not a great format for editing so the Sonic software you’ll use for editing is limited to basic trimming and rearranging of clips. Still, for basic conversion of your analog videotape to DVD with a minimum of hassle, the device works. The VideOh! has very little tolerance for unstable video images: if a tape has tracking problems this device will not fix the video and will likely not capture it at all.

All of the primary editing and DVD creation features of the VideOh! come from the Sonic MyDVD software, which interacts with your DVD burner. So you’ll be using the WinDVR software to first record your video to the hard drive and then author your DVD using MyDVD. The only easier way to get a DVD from your video would be to get a standalone living room DVD recorder, but then you’d sacrifice editing and authoring capabilities.

Overall, the VideOh! DVD Media Center performed well, and offered a simple, effective solution for creating DVDs and recording television broadcasts directly onto the computer. It primarily wants to be a television watching and recording device, as evidenced by the fact that the device has a built-in television tuner. If you do not need or want to watch television on your computer, this is not the device for you. Its lack of video outputs may limit its appeal, but for many its low price and ease of use will be a very welcome combination.

Although Adaptec’s VideOh! tackles video editing and DVD tasks with simplicity, the internal television tuner reveals that it is really a TV recorder (DVR).