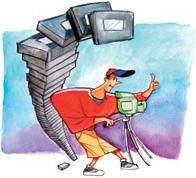 Many of the little things that you learn from from a lifetime of planning, directing, editing and producing videos can easily be applied to life as a whole.

True story: to get maximum production value for a medical program I was to edit, the director secretly set up a "heart attack" in the stands of the Ohio State football stadium during an actual game, while stealth cameras recorded the sequence. On cue, the "victim" clutched his chest and crashed to the ground as his "friend" jumped up, shouting, "He’s having a heart attack! Is there a doctor?"

Before the fake "doctor" could even move, 20 real physicians leaped up and surged to the rescue, spoiling the whole enterprise. The director had unknowingly bought seats in the section allotted to the Ohio State Medical School. Thus, I learned the first of video’s many small lessons about life: plan, then plan some more! About the other lessons I could write a whole book, but here are just ten more. (Careful: that clay may not be dry yet.)

Within about a minute, the fuss around the "heart attack" had died down and everyone was seated again; but some time during the first five seconds of that minute the director had figured out how to exploit the disaster. Even before pulling all those docs off the hapless "victim," he sent both cameras running to opposite aisles to capture wide shots of the whole scene.

Back in the edit suite, the director supplied me with dramatic pans of the game and its thousands of spectators — pans that ended up zooming in on the isolated crowd of people standing up and milling around the "victim." (At that distance the audio didn’t pick up the director’s red-faced explanation to the wannabe rescuers.) By using these shots instead of the original establishing footage, I was able to enhance the illusion that the "heart attack" occurred in the middle of a real football game.

Nowadays, you’d probably be in big trouble if you staged something like this, but we learned some valuable lessons that day. Life doesn’t confine its surprises, good and bad, to video shoots. The faster you think on your feet, the better you can exploit the unexpected.

Back in the stadium, my director still didn’t have a heart attack sequence; so by the time the game was over, he had devised an alternate plan and bought Ohio State scarves and pennants to implement it.

When he got home, he staged all the close shots in the empty concrete stands of a local high school. To conceal the mismatch, a bunch of us donned wool pants, overcoats, hats, and those scarves and pennants. The director shot the "attack" from high and low angles to frame off the fact that we extras were the only people sitting or standing around the victim. By inter-cutting these shots with the location material and laying continuous game audio under everything, I was able to build a convincing sequence.

It was those authentic scarves and pennants that sold the gag. The director bought those essential props before leaving Ohio because he’d immediately developed plan B. The moral is clear: in life as in video, you’re safer with a backup strategy.

You’re also better off if you correct mistakes on the spot. How many times have you thought, that take wasn’t perfect, but we’ll make it work? Whenever you think that way, you can be sure you’ll regret it later in the edit suite.

All shoots are made under pressure. With event videography, things happen only once, so you’d better get the money shot every time. With scripted productions, the clock is always running and it makes a sound like a cash register.

Don’t give in to the pressure. When you’re shooting events you can often substitute a shot or fake it. Have the bride cut a second slice of cake (while you frame off the empty wedge where she removed the one you missed.)

In scripted shows, keep telling yourself that you can’t reassemble everyone, return to the location, and rebuild the set. If it isn’t quite good enough, fix it right here, fix it now. You’ll thank yourself later. Just as in life, you can never go back.

Last month I watched a CBS cameraman shoot the beach outside a seaside restaurant, even though his assignment was an interview inside. Why? Because the editor might — just might — need a couple seconds of fill or a visual for a voice-over intro, or, well, who knew what? Experienced pros protect their rears. Cover shots, protection, cutaways, color: they’re all footage recorded specifically to fix mistakes or fill editing needs that are not yet apparent.

For the same reason, pros get far more footage than they need. The ten-minute interview I watched in the restaurant ran literally ten seconds on the CBS Evening News. The rest of the footage was protection taped to give the producer the widest possible latitude in assembling the interview.

How do you become crew for the CBS News? The headline says it all. During that interview, the cameraman continuously hand-held a 20-pound camcorder with no Steadicam, no shoulder brace — not even lens stabilization, while framing shots on the fly and pulling focus between interview subjects. On screen, the shots were all perfect.

CBS didn’t pay him to learn on the job, so he must have put in hours, weeks, years making shot after shot, practicing the techniques of professional camera work. The same is true everywhere. Whether you’re a neurosurgeon or a data entry clerk, you have to polish your technique if you want to play with the pros.

When handed a lemon, make lemonade: create something good out of whatever materials you can manage to find. Some students of mine wanted a futuristic palace for the evil dictator in a mini Star Wars knockoff. Problem: no titanium palace — oh, and no 43rd century costumes either. What they did have was the biblical robes from the high school’s recent musical and our town’s Spanish Baroque City Hall, complete with outside staircases, rows of arches, and a lush garden courtyard.

Presto chango! Planet Teknika morphed into a sort of Arabian Nights environment and the story worked just as well. If my students hadn’t seen the possibilities in the resources at hand, they never could have made their video. In this world where you rarely get what you want, ordinary people make do; creative people make lemonade.

Today’s production managers can work with amazing databases that include literally thousands of line items, pre-loaded with up-to-date salary scales, rental costs, permit fees, and on and on. An extremely skilled producer can budget out a ten million-dollar program, right down to the last measly cent.

Nevertheless, at or near the end of every form is an extra line for cash included to pay for goof-ups, rotten weather, and unforeseen disasters. Though it’s usually called a contingency fee, it should be named for Murphy’s Law. For an office interview with a CEO, a safe contingency fee might be 10% of the whole budget, while the slush fund for "Stalking Elusive Bigfoot" might be triple that much; but whatever percentage is set, even the smartest veteran producer can only pray it’s enough.

You may not have the luxury of any contingency allowance, but you can avoid planning projects that will evidently consume all your resources, because they will actually need more. In video and in life, everything costs more and takes longer.

When Vladimir Nabokov said, "you must kill your darlings," he meant you must often delete from your work the passages you’re most proud of. If your video feels twice as long as its running time, it may just be a bad video. But if it runs 15 minutes when it might well finish in 12, review it for Cool Stuff that you just couldn’t bear to part with: that gorgeous sunset, that wonderful run all the way down the ski slope, that moving shot that took all day to record.

The dismal truth is that nobody — nobody — is as interested in your stuff as you are, even when it’s your very best stuff. So whatever your masterpiece, video or not, if something doesn’t move things along, it doesn’t belong there.

2. Spread the Credit Around

Assuming you wrote, produced, shot, directed, and edited your great opus, you can say all that with just one title: "A video by (your name here)." Instead of parading an endless scroll of self-congratulatory credits, be generous in featuring everyone who helped you. It rewards them, makes them feel good about helping you again, and makes you look good to viewers. Besides, it’s the right thing to do. A universal truth to be learned from video is that hogging the credit gets you the spotlight; sharing the credit gets significantly more accomplished.

Finally, in Shakespeare in Love, the producer Philip Henslowe admits that every production is inevitably afflicted with disasters it cannot possibly survive; yet everything works out in the end. Asked how this can possibly happen, Henslowe replies, "I dunno; it’s a mystery."

It’s true: in the world of video, just as in life, some things don’t change in 400 years.