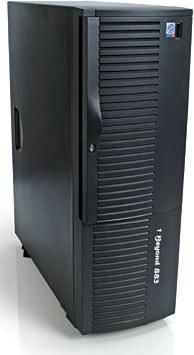 Need High Definition? Short on time? Lean on budget? 1 Beyond brings HDV editing technology to consumers. The big question is, is HDV viable for under $10,000? Clients are starting to demand HD projects and for any production house not already stocked with more than $100k of equipment, the new HDV format is the way to go. As more manufacturers release HDV format camcorders, our confidence that this is indeed a viable format is reinforced.

The 1 Beyond case stands tall and proud, like the ebony monolith from 2001: A Space Odyssey. Once you open the drive bay door, it’s even more impressive, with the multiple front-mounted inputs from the Canopus ADVS-50, two DVD drives (one burns DVDs and the other burns CDs) and a 5-drive hot-swap carriage.

It took just under 10 minutes to hook everything up and power up the machine, even taking the time to route cables carefully. The beast is not very quiet, considering how many fans it has, but it runs cool.

Upon going through the startup screens, we noticed something a bit puzzling. The mounted hard drives in a RAID-style hot-swap enclosure and the computer come with a RAID card, yet the drives were not hooked up as a RAID. Instead, they were individually hooked up and set up as separate drives. Adding, removing and replacing drives is a no-screwdriver slide and lock affair, which makes this system very expandable, adaptable and gives you complete data portability.

The computer started up very quickly, without a hitch. We started Premiere Pro straight away and edited together a quick little HDV scene at 1280×720. We were both impressed and disappointed immediately. This system has a ton of potential, but in a world where time means money, creation time far outweighs any other specs a system could have. When editing full HDV resolution video, there was a significant latency of two seconds between when we hit the spacebar and before the video actually started playing. It reminded us of the old days when sluggish Premiere editing was the norm.

1 Beyond chose the CineForm Aspect HD plugin, rather than the JVC MPEG HDV editing solution, which is good. The major advantage of Aspect HDV editing is that it is a simple codec for Windows, so you can use any software you want that uses Windows AVIs as its native format. The capture process involves a transcoding step, which uncompresses the video to some extent. This reduces the amount of computing power required to display the video. When combined with a special rendering engine included with the CineForm software, Premiere output real-time previews in most everyday editing and effects situations we tested. This is a very important feature and was almost enough to make us forget we were editing at HD resolutions at all.

The processing delay before previews ran was less noticeable in After Effects, since we’re used to that kind of workflow when doing heavy compositing.

It’s not that this is a slow computer. To the contrary: this system screams at 3.4 GHz. Our standardized dual-pass VBR MPEG-2 rendering test hit 23 fps, tying the HP xw4200 for the temporary crown of fastest (this month anyhow). Since 1 Beyond is using the Adobe video suite as the basis for its hardware, the software is tried and true. At my job, I use a Newtek VT[3], with After Effects as the compositing package, and without getting on a diatribe, the words "mystery errors" come to mind with that system. Strangely, we did have problems switching between HDV modes and DV modes. Specifically, we didn’t drop frames when capturing HDV, but when we tried capturing DV video, we experienced a periodic frame drop until we reconfigured the system a bit.

The hardware configuration was a bit puzzling. Why does the machine have a RAID card without at least hooking up the RAID? It wasn’t a major issue. When we have tested systems configured with a RAID, we have seen significant disk performance improvements on artificial benchmarks, but the speed has not affected real-world editing, since "fast enough" is all you need.

The Canopus ADVC-50 is a definite highlight of this machine and lets you connect analog sources to your machine without a second thought. The hardware automatically converts analog sources (video and audio) to DV. The front-mounted interface box (not really a BoB since it is not a breakout) in the drive bay area is far better than leaving the connections (including a 4-pin FireWire port) in the rear of the machine. You have to open the drive bay door to get to the connectors, which makes the door itself nothing more than trim.

The professional OpenGL video card is one we’ve seen in many graphics workstation, but we still question its value for video editing. Although the Quadro 4 980 XGL video card tested well in the GL Excess Benchmark, a new GeForce 6800 GT is more than twice as fast, and wouldn’t effect the price per unit all that much.

The difference is that the Quadro is a professional card and the 6800 is a gaming card. It may be that professionals using high-end 3D modeling and animation software would notice a difference, but it is unlikely that a video editor, even one using After Effects 6.5 OpenGL-based preview window, would see an advantage.

This 1 Beyond monolith rocks and I definitely have this system on my wish list for Christmas. The laggy playback issue is significant, but livable, especially considering that you get realtime HDV previews from Premiere.

Overall, this is a solid, professional, coordinated HDV workstation with muscle to spare. The real reason to go with 1 Beyond, however, is that they know what they are doing and can personally recommend and configure a system for your needs.

Ty Audronis is a producer at Engelbrecht Advertising, and owner of Audronis A/V.