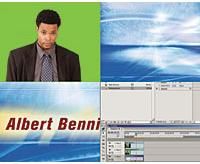 In video editing, a composite is a video image that incorporates two or more separate visual media elements together on the screen. These elements can be video streams, words, pictures, drawings, graphics or 3D animations. In short, anything you can see (and digitally image), you can composite.

The word "composite," Latinate in origin, begins with the prefix com, which carries the meaning with or together. Next comes –posite, a form of the verb poser, meaning to place or put. The two together mean, well, to put something together, to place items side by side or on top of each other. From this, we get other important video-related words, like composition and composer.

In this article, we’ll take a quick look at the art of creating video composites and provide you with three simple examples of basic composites you can easily create using your video editing software.

We’ve all become quite familiar with the picture-in-picture effect (PnP or PiP), most often seen on the nightly news. This is when the newscaster has a graphic or video image over his or her shoulder. Let’s take a quick look at how you can easily create this effect using Adobe Premiere Pro. (Most editing programs follow a similar format.)

At this point, what we have is a pair of video layers, one on top of the other. If you preview the timeline by hitting the Enter key, you’ll see only the Video 2 track, because it completely obscures (or lies on top of) the Video 1 track below it. This is how tracks work in Premiere and many other video editing programs: video and image tracks are like stacked layers, with higher-numbered tracks appearing on top of the lower-numbered tracks. To transform this into a picture-in-picture effect, we need to reduce the size of the Video 2 track and move it to the corner, revealing the Video 1 track below it. To do this, open the Effects Control panel and find the Motion property (Figure 1c). Using these controls, adjust the size of the clip to and position it into the corner. Make sure you keep the settings at the beginning and the end of the clip exactly the same or else the software will think you want to move it around and animate it. When finished, you should have a picture-in-picture effect just like the one in Figure 1d.

This last step is going to be different in other applications (and, indeed, was different in pervious version of Premiere). Don’t worry though: the concept is exactly the same and the language may even be similar. For example, in Vegas, you’ll use the Track Motion tool.

Another common video effect appears each evening on the nightly news during the weather report. In it, we usually see a shot which consists of the image of a meteorologist appearing over an animated map that displays weather information, including clouds, cold fronts, temperatures, pressures and rainstorms. The most common method for creating this effect is called a chromakey, bluescreen or greenscreen compositing. In many professional studios, there’s usually a wall painted green or blue to facilitate this process, but we’ll assume that you don’t necessarily have such a wall available. Here’s a simple way you can try it out with a sheet of green construction paper and some toys.

First, set up your shot so that the green paper fills the entire background (figure 2). It is important that your background be as evenly lit as possible, so that the software will have one value of green to contend with, instead of a wider range of colors that can be more difficult to key properly. Also, it’s important to choose a subject that has none of the color you’re using for the background. Next, place your subject in the shot and make sure it’s well lit, in order to get good separation from the background. Now shoot some video.

Since we’re going to make the background transparent, you’ll need something to put in the background environment. If, for example, you want your subject to fly through the sky like Superman, then a simple shot of blue sky will suffice.

Okay, now you can capture your clips and import them into Premiere, then arrange them on the timeline as described in the Picture-in-Picture example above, with the background in Video 1 and the green-screened subject in Video 2. Now we’re going to make everything that is green in Track 2 transparent, allowing the video in Track 1 to show through. Again, in Premiere Pro, this is in the Effect Control window under transparency, but in Vegas you would add a Chromakey video effect. After you’ve selected the green color to make transparent with the eyedropper tool, you’ll almost certainly have to adjust the Threshold control to get a good, sharp key. Once you do, you should have an image of your subject sailing across the blue sky. Corny, yes, but kids love it. Unless your lighting was perfect, the key itself is probably not perfect. Keying is tough, both in production and in post, and considered an art unto itself.

Back in the day, the word matte referred to an actual, physical piece of glass that had a picture painted on it that the creators of a film wanted to blend with an actual filmed image. You’d think this primitive technique would look incredibly artificial, but, from Ben Hur to Indiana Jones, glass matte paintings were the height of special effects realism.

Today, we can create a matte digitally in our computer. For our example, we’re going to use basic matte techniques to create a title in which the video appears through the letters of the title. We’ll start by creating a matte in your image editor at DV resolution, 720×480 (see the sidebar for why this is not exactly right). Choose a thick, sans-serif font, like Arial Black, and enter your title using the Text tool. Be sure to make the letters big enough to see video through them: 72 points is a good place to start. Keep the title safe area in mind when you enter your text. Keep the text one color and the background black for this example. Don’t worry if the background color is ugly, since we’ll make it disappear in a second. Finally, save the file as a TGA or a PNG file, since these formats support automatic transparency.

Place your background video (the moving image you want to see through the letters of your title) into the Video 1 track. Next, add the graphic to the project into the Video 2 track.

You can use the chromakey technique as previously described or the software may automatically make the black area opaque and the text transparent. There is a lot of variability in how different software packages do this, but if you saved an Alpha Channel (see the sidebar) with a TGA or PNG file, your work is done.

The precise technique for creating mattes, masks, chromakey effects and transparency can be complex, but we hope that you can see that the concept is simple. So get out there and find a tutorial or two on the Net and get out your camcorder and start creating some great composites today.

When creating graphics on a computer for display on a television, you will eventually discover an odd distortion effect. If you work with an image canvas that is 720×480 on a computer (with square pixels), when you view the results on a television (with rectangular pixels), it will appear slightly squashed. This will be most noticeable with perfect circles and spheres. The solution is to create your still graphics at 720×540 (or 655×480), and then make sure the graphic is squashed (or stretched) to fill the screen in your video editor.