Santa Monica, Calif., is known for its beaches, lifestyle and great weather. But it’s also just a couple of hops, skips and jumps from another well-known location, Hollywood. So it’s no wonder that Adobe, makers of the industry-leading video editing software known as Adobe Premiere Pro, should want to be closer to the filmmaking magic. 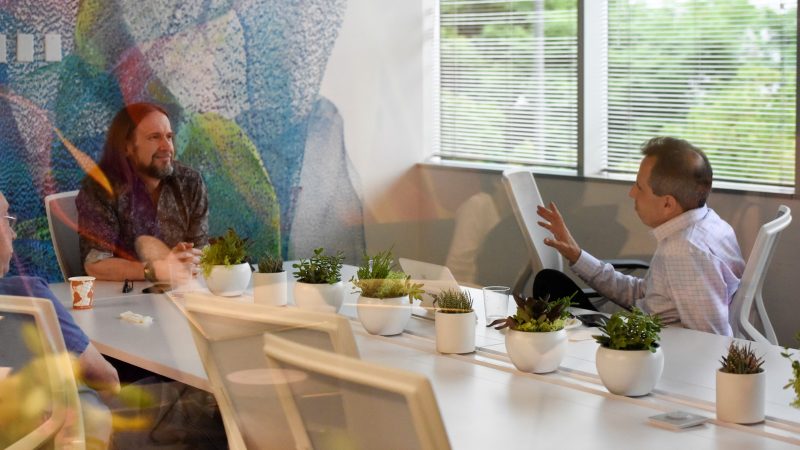 Earlier this week, Adobe hosted a morning meet and greet, complete with muffins, OJ and plenty of coffee. The event was easy to navigate with cup in hand without spilling a drop because there was plenty of open space for maneuvering in the new Santa Monica Office space. There were also plenty of windows to let in the California sunshine. Besides conference rooms and a well-appointed kitchen area, the facility is centered around the showpiece edit suite, featuring support for next-gen entertainment technology including VR/AR, and HDR capabilities. Plus, there’s also an optimized sound environment.

Van Bedient, Senior Business Development Manager at Adobe, was more than willing to answer questions as to why this is all happening. So we asked.

Videomaker
Why has Adobe decided to open an office in Santa Monica?

Van Bedient
Adobe has for years worked closely with filmmakers and editors in Hollywood, and our new space feels like an extension of the inroads we’ve made in the community thus far. We’re very excited to have dedicated space, an expanded team and local presence that enables us to engage more directly with the post-production community. We’re excited to deepen the relationships we’ve built over the years, and to begin new conversations.

Our Hollywood team is focused on key outreach and engagement opportunities that bring us even closer to the industry, including partnership and training initiatives with organizations like American Cinema Editors and Motion Picture Editors Guild. Our customer engagement team, engineers and developers here in the Santa Monica office have many decades of experience in professional post-production, and we’re very fortunate that these highly accomplished and knowledgeable individuals have a new home to help take us even further.

Videomaker
Can you describe some of the new features and functionality of Premiere Pro which you see as impacting the editing process as it relates to the Hollywood community?

Bedient
We released several new Premiere Pro features this year that improve collaboration and efficiency in professional workflows that we’re very excited about. This includes two features powered by Adobe Sensei that reduce the time post-professional have to spend tedious tasks, allowing more time for creativity: Color Match, a new feature that detects and matches color in two shots to achieve consistency across a project very quickly, and Auto Ducking, which automatically adjusts soundtrack audio around dialog.

Features that empower more efficient collaboration, such as Shared Projects, directly serve the Hollywood community. Shared Projects allow multiple editors and assistant editors to work together seamlessly in the same project with shared media and assets. These collaboration and version management features are of paramount importance when working with large post-production teams in fast-paced environments.

We also released new metadata improvements that allow for simple and easy tracking, organizing and management of large volumes of data and assets in a film or television environment. Color information can be updated and managed through the process to ensure the visualizations in the cutting room all the way to the final output are consistent and accurate representations of the vision as it was imagined.

Videomaker
With such a beautiful space, it’d be a shame not to share it. So what kind of activities will be taking place here?

Bedient
Within the new studio and edit suite, we look forward to working closely with customers for demonstrations, presentations, workflow discussions and training. We will also utilize the space for intimate events, such as meetings with our newly formed Hollywood Customer Advisory Board, customer meetings and as an overall showcase for Adobe’s video products here in LA.

Marshal M. Rosenthal is a veteran of 25 years of technology reporting and based on the West Coast.