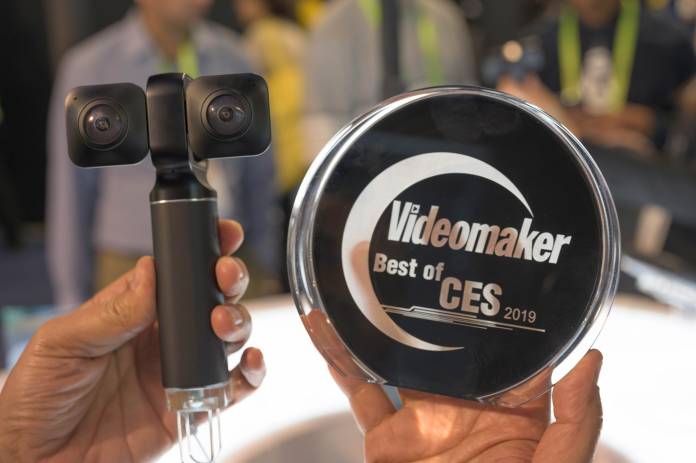 HumanEyes is showing off the new Vuze XR Dual VR Camera at CES 2019. This is the next 360 camera in the company’s Vuze VR camera lineup, and we found it impressive enough to garner Videomaker’s Best 360 Camera of CES 2019.

Two experiences in one camera

At the core of this project, HumanEyes wanted to make a camera that’s versatile.

“In designing the Vuze XR, we set out to deliver a camera that offers the ultimate in versatility to both consumers and professionals, and to do so at a price point that is within reach of just about everyone,” said Jim Malcolm, GM, North America for HumanEyes.

Versatility is apparent when looking at the Vuze XR’s two shooting formats. Users have the option to shoot in either 2D 360-degree or stereoscopic 3D VR180. So you can either make your video spherical or more traditionally flat. Check out how the different formats look in the videos below:

“Its innovative, compact design essentially does the job of three cameras, making it ideal for activities like hiking, concerts, outdoor adventures and travel where you need to travel light, yet want the freedom to capture your experience in a variety of formats,” says Malcolm.

There’s a mobile app for both iOS and Android

The Vuze XR is available to order now for $439. To learn more, go to vuze.camera.